Paragraph No. 2 (2) of Appendix 1 with the resolution dated 3/11/2009 against the number (1) read above from the General Administration Department, provision has been made that,  Or to try to keep both in the same place as far as possible in cases where they are employed in any public enterprise of the state, to consider sympathetically at the competent level the demands to keep the husband or wife in the same place where the husband or wife is or to appoint both in one place.  During the process of such consideration, the competent authority must give priority to the public interest, administrative needs and the interests of the work. ”

According to the resolution against No. (2) and the circular against No. (3) read above in the General Administration Department, a disabled employee as well as a female employee appointed on fixed salary on contract basis should have served for at least one year and a male employee should have served for at least two years.  Provision has been made for such candidates to be considered and transferred if they apply for transfer.

Thus, in spite of the implementation of the above instructions of the General Administration Department for the transfer of employees as well as disabled employees appointed through regular and fixed salary regular recruitment process, instructions have been issued by some departments not to transfer / relocate before the completion of five years of service in case of such employees.  Which is not consistent with the existing instructions of the General Administration Department.  Hence, the following instructions are circulated in this regard.  Circular:

.  Jobs of officers / employees on duty in State Government Boards, Corporations, Granted Institutions are mostly non-transferable.  In such circumstances, if the spouse is on duty in the State or Panchayat service, he / she should be considered for appointment at the same place / nearby place by transfer or deputation to an equivalent place.  Thus, before making appointment by transfer / deputation, the competent authority should give priority to public interest, administrative need and performance.

3. Resolution against the above-mentioned number (2) of the General Administration Department provides for replacement of a female employee who has been appointed on a fixed salary basis for at least one year of service and a male employee who has served for at least two years.  However, in case the spouse can be kept in the same place / nearby place, even if the male employee has served for one year, he / she will be able to transfer / change district after one year.

By order of the Governor of Gujarat and in his name, 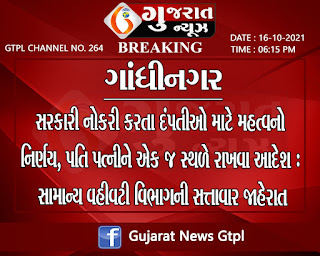 Subject: - Matter of sending change applications in case of husband and wife.

Hospitals / Community Health Centers / Government Nursing Schools / Colleges under the control of this office have to consider making transfers in the case of spouses of employees on duty in the nursing cadre.  To be sent to this office through the head as well as with their recommendation,

(1) If both the spouses are performing their duties as government employees in state service, panchayat service or any public enterprises of the state, they shall be treated as husband and wife.

The husband must send in the case of the wife.

(4) Spouse acts as a Government servant.  The certificate in this regard has to be obtained from the place of duty of the husband and wife and sent to the head of the organization after verification.

(2) A certified copy of the appointment order of both husband and wife as government employees shall be submitted.  (2) Husband / wife against the spouse who has demanded transfer

(3) Whether the preliminary departmental investigation is ongoing / costing against the employee under whose control the application for transfer is sent?  Certificate of the head of the organization in that regard.

(2) Service card (history sheet) prescribed by the Government for the employee.

Adequate verification of evidence will have to be done by the head of the organization.  (11) The follow up of the applications made on the basis of the said circular will be considered on the basis of the workload as well as the availability of vacancies.

Requests for transfer of the pursuit of this circular only in the case of husband and wife should be sent here through the head of the institution with their recommendation along with the above enclosure.  Acceptance of online applications for transfer at the discretion of other employees is under consideration.  Applications will have to be made as per the final decision in which separate instructions will be circulated.  Take clear note of this.