Saikhom Mirabai Chanu is an Indian weightlifter. She won the silver medal at Tokyo Olympics

Saikhom Mirabai Chanu is an Indian weightlifter. She won the silver medal at Tokyo Olympics 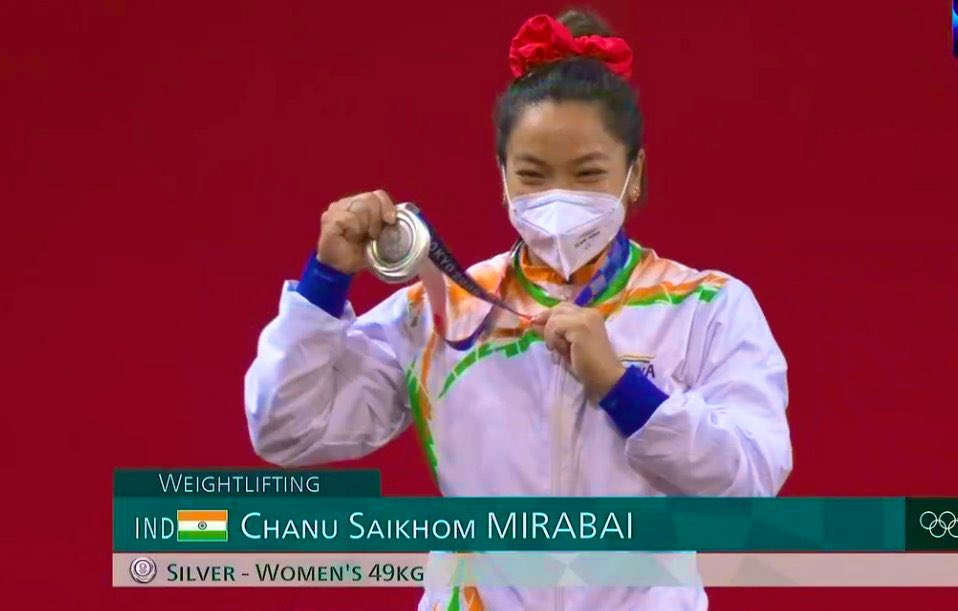 Saikhom Mirabai Chanu (born 8 August 1994) is an Indian weightlifter. She won the silver medal at Tokyo Olympics in Women's 49 kg, thereby bringing India its first medal in the event. A regular presence in international events since 2014 in the 48 kg category, Chanu has won the World Championships and multiple medals at the Commonwealth Games. She was awarded the Padma Shri by the Government of India for her contributions to the sport. She was awarded Rajiv Gandhi Khel Ratna awards by the Government of India for year 2018.

Chanu had won the silver medal in the women's 48 kg weight class at the 2014 Commonwealth Games, Glasgow; she went on to break the games record en route to the gold medal at the 2018 edition of the event held in Gold Coast. Her biggest achievement came in 2017, when she won the gold medal at World Weightlifting Championships held in Anaheim, United States. She won a Silver Medal and India's 1st Olympic Medal at the Tokyo Olympics


Saikhom Mirabai Chanu was born on 8 August 1994 in Nongpok Kakching, Imphal, Manipur, to a Meitei family. Her family identified her strength from an early age when she was just 12. She could easily carry huge bundle of firewood to her home which her elder brother found it hard to even pick up.


Chanu qualified for the 2016 Rio Olympics in the women's 48 kg category. However, she failed to finish the event as she failed to lift the weight in any of her three attempts in clean & jerk section.In 2017, she won the Gold medal in the Women's 48 kg category by lifting a competition record 194 kg in total (85 kg snatch and 109 kg clean & jerk) in the 2017 World Weightlifting Championships held at Anaheim, CA, United States.


In 2021, Mirabai Chanu became the 1st Indian weightlifter who qualified for the 2021 Summer Games as she secured 2nd position in the 49kg category.Mirabai Chanu, is the only Indian women participating in weightlifting competition in Tokyo Olympics, as she eye for redemption since the disappointment in Rio.The 27 year old, lifted 86kg in snatch and then created the world record by lifting a massive 115kg in the clean and jerk, as the combination of 202kg won her a Bronze medal and a ticket for Tokyo Olympics.


Chanu lifted a total of 196 kg, 86 kg in Snatch and 110 kg in Clean and Jerk to win the first gold medal for India in the Commonwealth Games 2018. En route to the medal, she broke the games record for the weight category; the effort also marked her personal best performance.She won Bronze in Clean and Jerk at 49 kg Category in 2019 Asian Weightlifting Championships. The total weight of 199 kg was her best ever and she just missed out on a bronze medal as her Snatch weight was lower than the third place athlete, both of whom had an identical total. At the 2019 World Weightlifting Championships, Mirabai lifted a total of 201kgs (87kgs Snatch and 114kgs Clean & Jerk) to finish 4th. This personal best total also created a new national record in the 49kg category. She broke her personal record again four months later when she lifted 203kgs (88kgs in Snatch and 115kg in Clean & Jerk,) in the 49kg category to win the gold medal at the 2020 Senior National Weightlifting Championships.


Chanu won the silver medal at the 2020 Summer Olympics in Tokyo, becoming the 1st Indian weightlifter to win silver in Olympics, winning a silver medal in 49kg weightlifting with a total lift of 202 kg. Chanu managed to lift a total of 202 kg in the women’s 49kg category to become the second Indian weightlifter after Karnam Malleswari to win an Olympic medal. A new Olympic record was registered by Mirabai Chanu with a successful lift of 115kg in clean and jerk.The Indian Prime Minister Narendra Modi congratulated her on bringing home the silver medal from the event, stating it as "India is elated with happier start and a stupendous performance"

Saikhom Mirabai Chanu is an Indian weightlifter. She won the silver medal at Tokyo Olympics
4/ 5
Oleh HappyToHelpTech
Prev Next Home