-->
Home / latest News / Mega Program On Completion of five Years of Rupani Government, find out what is special in the celebration

Mega Program On Completion of five Years of Rupani Government, find out what is special in the celebration

Mega Program On Completion of five Years of Rupani Government, find out what is special in the celebration 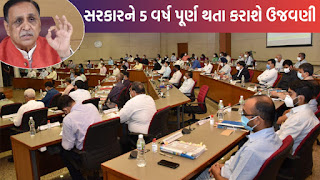 The government will celebrate the completion of 5 years
Various events will be held from 1 to 9 August
Oath taken as Chief Minister on August 7, 2016
In Gujarat, as the five years of Chief Minister Vijay Rupani's tenure are coming to an end, the BJP will make strenuous preparations to celebrate it. It is important that Chief Minister Vijay Rupani was sworn in as the 16th Chief Minister on August 7, 2016.  His 5-year term is coming to an end on August 7.  Then, from August 1 to 9, grand programs will be organized to celebrate the successful five-year tenure of Chief Minister Vijay Rupani.
Various events will be held from 1 to 9 August
The celebrations will run from August 1 to August 9. The entire program has been outlined. It is prohibited that a mega event can be organized at the Statue of Unity or Mahatma Mandir while employment cards will also be awarded to 50,000 youths during the event.
Celebrating the completion of 5 years of Rupani government
Significantly, a recent cabinet meeting in Gandhinagar, attended by senior leaders of the organization, is expected to discuss the issues.
Employment letter will be given to 50 thousand youth
Not only that, when the Gujarat Assembly elections are to be held in the near future, an attempt may be made to clean and improve the image of the government in front of the people.  However, during his tenure as Chief Minister, he has taken many important decisions and the image of the government as a sensitive government has emerged before the people.
The celebration program will last 9 days
Home Minister in Gujarat: Speaking, you may think that Amit Bhai came here for the first time in so many years, but you did not worry at all.
Thalaiva makes big announcement: says goodbye to politics forever, now party will do it
... So you can get fuel for 60-65 rupees, find out what the central government is doing
On the completion of five years in the Rupani government, the government has organized various programs for 9 days to celebrate the successful program of five years as the Chief Minister which will run from 1st August to 9th August. Let's take a look at this program.
The celebration program will last 9 days
August 1 - Gyan Shakti Day
Closing Ceremony of School Room, Panchayat House and Anganwadi
August 2 - Sensation Day
A service bridge program will be organized for 250 taluka 150 municipalities and municipal corporation zone wise wards for civil service.
August 3 - Cabinet Day
The ministers, including the CM, will be in Gandhinagar to meet visitors from various sectors after the cabinet meeting
August 4 - Women Empowerment
10 thousand Sakhi Mandals, including 5 thousand from cities, a program to provide bank loans to one lakh sisters in 100 places in the state.
August 5 - Earth Day Respect Day
Gujarat 50 Kisan Suryodaya Yojana and 50 Saat Pagla Khedut Kalyan Yojana will be held at a total of 100 places with special program in Dangs.
August 6 - Youth Power Day
Target to give appointment letters to approximately 50 thousand youth in Gujarat by organizing district-wise industrial employment fairs
August 7 - Poor Upliftment Day
Initiation of Mother Homeland Scheme
Dedication-Khatmuhurt program of Awas Yojana
41 programs of Corona Warriors will be held
August 8 - Urban welfare
GMFB will distribute checks of Rs.1000 crore to municipalities
41 programs will be held in the state including 8 metros for the inauguration of other works.
August 9 - World Tribal Day
Commencement of 1 lakh crore Vanbandhu Yojana Part-2
Program at 28 places in tribal areas with Khatmuhurat of Birsa Munda University
HappyToHelpTech

Mega Program On Completion of five Years of Rupani Government, find out what is special in the celebration
4/ 5
Oleh HappyToHelpTech
Prev Next Home