June 5 is set to be celebrated as World Environment Day

June 5 is set to be celebrated as World Environment Day

Awareness on the issue of environment increases in the minds of the people - with the aim of making people participate in the work of environmental protection.  June 5 is celebrated as "World Environment Day"

This year's theme for "Environment Day", celebrated around the world by the United Nations since the 19th, is "Green Economy".

The conservation of nature in the world was first started by Emperor Ashoka in the third century.  Recognizing the importance of nature - the rules of control and protection of wildlife hunting are found in its inscriptions today.

Representatives from around the world gathered in Stockholm on June 14 to commit to the environment.  Issued a declaration for the preservation of the environment.  As part of this, the United Nations  June 5 is set to be celebrated as "World Environment Day".

Awareness on the issue of environment increases in the minds of the people - every year with the aim of making people participate in the work of environmental protection.  June 5 is World Environment Day.  Goals are set, various programs are held.

The conservation of nature in the world was first started by Emperor Ashoka in the third century before Jesus.  Acknowledging the importance of nature - the rules for controlling and protecting the hunting of wild animals were also made during this time.  Which is found in the inscription today.

The United Nations has chosen a theme for organizing programs on Environment Day.  The theme for 2015 is "Green Economy". An Economy that Improves the Living Things of the Common Man and Reduces the Threats to the Environment. Rainfall, Environmental Greenery, Clean Air, Extreme Flood Control, Groundwater  Maintaining proper surface, adequate amount of fodder for livestock, adequate amount of timber for vanilla industries, availability of employment, conservation of natural elements, prevention of air, water, soil and noise pollution in our environment and prevention of damage to environment by such pollutants.

The protection of the environment has become a matter of concern for every country.  There have been active efforts at the international level for the protection and promotion of the environment.  Antarctic continental environment protection protocol, biodiversity protection treaty, treaty to protect biodiversity and fisheries resources in oceans, protocol to prevent the release of various polluted gases, agreement on whaling hunting regulations, protection of ozone layer, protection of ozone layer  Many such global agreements exist.  Environmental problems like greenhouse effect, global warming, climate change are global problems.  The impact of any local environmental problem that the place does not have enough.  Its effects are in many large areas and mostly long term.  The book titled "Convenient Action" written by Chief Minister Shri Narendrabhai Modi on climate change makes it clear how sensitive we are to the environment.

We have reached the highest peaks of progress and development.  At the heart of our pride is the lion's share of the natural diversity that our state has received.  If we consider the pride of being the state with the longest coastline in the country, it can be seen that it is because of the long coastline that the diverse coastal systems of the state exist.  The brackish desert region, swampy plains and shallow water areas enrich the biodiversity of the state with the various ecosystems erected.  Due to rivers like Mahi and Tapi draining the forest areas of the eastern belt of Gujarat, Central Gujarat and South Gujarat are at the forefront of agricultural products and income in the state.  The contribution of Narmada river to the happiness and prosperity of Gujarat is not insignificant.  Today, Gujarat is truly becoming golden through the waters of Narmada.

The state has a diversity of flora and fauna as a result of diverse state ecosystems such as beaches, deserts, large rivers, Dhasia plains, Aravalli-Sahyadri-Satpuda hills, Cherna forests.  As a result, the state is home to some of the world's rarest mammals such as lions, reptiles, marine life and flora.  If we want to keep Gujarat at the forefront of the path of continuous progress, we must all learn to protect and preserve the environment.  Development will be possible only if the environmental resources are clean, healthy and sustainable.  The people of Gujarat are wise and understanding.  Non-violence is our life mantra.  Nature love is the culture here.

To avoid existing environmental problems such as global warming and climate change, it will be necessary to use unconventional energy sources with limited use of natural resources.  Being a state with such a large coastline naturally, we will be able to save the world from environmental problems by using wind energy, generating electricity from windmills and preventing pollution from being spread in the atmosphere by energy produced from coal or nuclear energy.  In addition, as the Tropic of Cancer passes through our state, solar energy can be obtained in large quantities.  We have prioritized the goal of getting electricity from sunlight using the largest source of solar energy.  Gujarat is in the forefront of becoming a solar energy hub by launching the world's first solar city at Charanka in Patan district this year.  We are committed to getting pollution free energy.  But this can be considered as an important step towards making Gujarat No. 1 in the world by making maximum efforts.  Sealing the carbon in the atmosphere by making maximum use of wood construction and furniture etc. will be useful in controlling the amount of carbon dioxide in the weather.  The "plant more trees" campaign is essential for this.

On "World Environment Day", let's take a joint resolution - which has reached the highest peaks in various fields like agriculture, industry, education. Let's make it sustainable through conservation and promotion of natural resources. 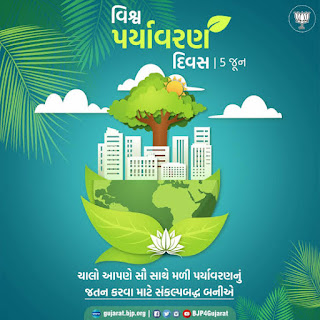 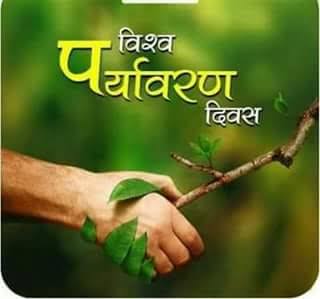 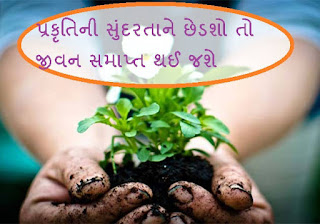 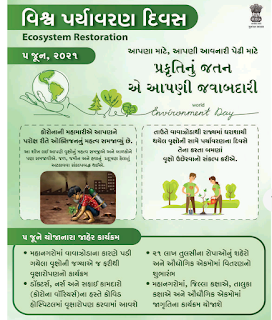