Finance Minister Nirmala Sitharaman said in a press conference today that the government has decided to extend the duration of the subsidy-linked home loan scheme (Pradhan Mantri Awas Yojana) for one year. The credit linked subsidy scheme was introduced by the government in 2017 and ended in March 2020. Now the date has been extended to March 2021. The benefit of this scheme will be available to people whose annual income is between Rs 6 lakh to Rs 18 lakh. 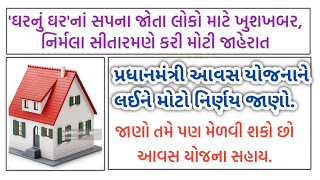 The scheme has so far benefited 3.3 lakh people. The government hopes that extending the scheme date will benefit more than 2.5 lakh people. The finance minister said this would lead to an investment of about Rs 70,000 crore in the housing sector, which would create employment opportunities as demand for steel, iron and other construction materials would increase.
What is a CLSS scheme?

Through this scheme, the government's efforts are to provide housing to the urban poor. There are two categories of Middle Income Group (MIG) with an annual income of Rs 6-12 lakh. It falls in the MIG-1 category and those whose annual income is between Rs 12-18 lakh are in the MIG-2 category. Under the credit linked subsidy scheme, people of both the categories get interest subsidy. The MIG-1 category can avail interest subsidy on home loans up to Rs 9 lakh. The interest subsidy is 4 per cent. The term of the loan will be up to 20 years.
MIG-2 category

MIG-2 category people can avail interest subsidy on home loans up to Rs 12 lakh. Interest subsidy is 3%. The term of the loan will be up to 20 years. Today, the Finance Minister informed about the second part of the Self-Reliant India Package. This includes all advertisements especially for farmers and migrant laborers. He has announced loans for 50 lakh peddlers. A special credit facility of Rs 5,000 crore has been arranged for them. Initially, the working capital will be around Rs 10,000 which can be used to start a business.
Who is eligible for Pradhan Manti Awas Yojana
How to apply for this PMAY Scheme
How to check your name in PMAY 2019 Beneficiary List
Is Pradhan Mantri Yojana available to existing home loan borrowers? pradhan Mantri Awas yojana eligibility