Hello friends
This artcle is new for you 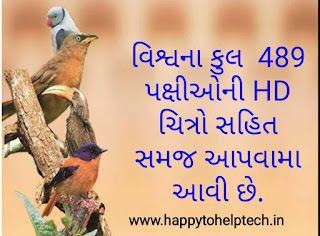 Bird article and also pdf at the last of this article
Read article and enjoy my friends.
State of India’s Bird Report 2020:
Bird population in India on decline! More than 50 per cent of the Indian bird species have registered a decline over the last few decades, according to the state of India’s bird report 2020. However, steady gain was registered in the numbers of the national bird Peacock, according to the report. The report was released at the 13th Conference of Parties of the Convention on the Conservation of Migratory Species of Wild Animals in Gandhinagar. The conclusions in the report were derived on the basis of the data provided by over 15,500 bird watchers spread across the country and a total of 867 Indian bird species were analysed in the report, according to the Indian Express.

101 bird species have been categorised under high conservation concern with raptors, migratory shorebirds, White-rumped vulture, Richard’s Pipit, Indian vulture, Large-billed Leaf Warbler, Pacific Golden Plover and Curlew Sandpiper registering the highest fall. Only 48 per cent of all the species analyzed in the report have registered a stable bird population and a slight increase in their numbers. The species which have registered a healthy spurt in their numbers include Rosy Starling, Feral Pigeon, Glossy Ibis, Plain Prinia and Ashy Prinia. Primary school latest update
The biggest highlight in the bird population report has been a dramatic jump in the number of the national bird peacock. The report has laid out a number of reasons as well which may have led to a healthy population of peacocks. The report has said that the species flourished in regions which are neither very dry nor very wet. Kerala which has of late seen a “drying trend” has also registered a spike in the numbers. Ability to expand its range has also helped the species couple with the harsh penalty and punishment under the Wildlife act.

Contrary to the speculations of the house sparrow experiencing a big fall in numbers, the report has found that its population has remained stable over the last 2-3 decades. The Indian vulture has recorded a consistent drop in its numbers since the 1990s the report has highlighted. The Indian bustards including the Great Indian Bustard, the Macqueen’s Bustard, Lesser Florican and the Bengal Florican have also been facing the onslaught of loss of habitat and hunting practices by humans, the report on the Indian bird population concludes.www.happytohelptech.in

The lake attracts over 210 species of birds in the winter, and harbors a variety of plants and animals. Besides a few mammalian species including the endangered wild ass and the black buck, its migratory bird population includes rosy pelicans, flamingoes, white storks, brahminy ducks and herons. Thousands of migratory waterfowl flock to this sanctuary just after the Indian monsoon season. The shallow area and ponds on the outer fringes of the lake attract the wading birds that feed in the shallow waters. Millions of birds visit the bird sanctuary in winter and spring. It harbors over 250 species of wetland birds.
GUJARAT NA VIVIDH PAKSHIO MATE NI FREE BOOK