Home / latest News / Good News In Gujarat, shops other than malls and complexes can be started from tomorrow

Good News In Gujarat, shops other than malls and complexes can be started from tomorrow

Join Telegram Group
Good News In Gujarat, shops other than malls and complexes can be started from tomorrow with conditions, not allowed here 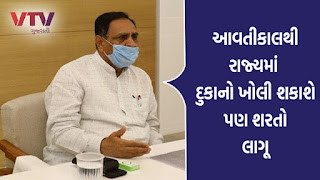 CM Vijaybhai Rupani has made an important decision for the small and big shopkeepers and businessmen of the state.  Tomorrow, Sunday in all the districts of the state.  From April 26, all shops except malls as well as marketing complexes will be allowed to run their own businesses.  The state government also exempted jobs, businesses and professionals from all over India by the central government.  CMO Secretary Ashwini Kumar made the announcement.

CM Rupani's important decision on Centre's decision will be opened in the state subject to conditions from tomorrow.
Following the declaration of the Government of India, CM Rupani has also taken an important decision.  He has announced the decision.  Concessions to open shops are subject to terms and conditions.  This was announced by CMO Secretary Ashwini Kumar at a press conference at the supply department.
Conditional approval granted

Accordingly, the area in which the shop-business is permitted for business should be outside the containment area.  The shop-business will have to keep 50 per cent of the regular staff of the business.  Wearing masks and maintaining social distance will also be mandatory for shopkeepers.  Containment areas declared by the local authority will be considered valid.  Gumastadhara certificate will be valid for opening a shop
These industries are also approved
I.T as well as ITES Industries will also be allowed on the condition of keeping 50 per cent staff for operations and if such industry is in an area outside the containment zone, such industries will also be allowed.
Shops will not be opened in these areas
Shops in hotspots, clusters and content areas as well as shops in red zones and areas where there are more cases will not open.  Shops will only open in the green zone, especially in urban areas.

Cooler seen in a scene of 'Mahabharat', the truth came out after the memes were made.
Gujarati mahiti click here
HappyToHelpTech

Good News In Gujarat, shops other than malls and complexes can be started from tomorrow
4/ 5
Oleh HappyToHelpTech
Prev Next Home