Severe cyclonic storm Vayu is likely to hit Gujarat on June 12 night with a wind speed of 130-140 kilometres per hour, the India Meteorological Department (IMD) said. It is expected to intensify into a cyclonic storm in 12 hours and then turn into a severe cyclonic storm in the subsequent 24 hours.With the warning of a heavy rainfall in parts of Gujarat, the state government has decided to deploy NDRF personnel in coastal areas of Saurashtra and Kutch. 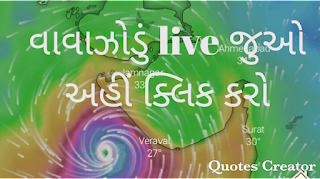 Wind speed of 110-120 kmph expected
The government will also put the Army, the Navy and the Coast Guard on alert. IMD has issued a warning of heavy rains with winds blowing at the speed of over 110 kms on June 13 and 14 in coastal areas of Saurashtra and Kutch.
Following the High-Level Review meeting taken by Union Home Minister on Cyclone Vayu, Ministry of Home Affairs has issued detailed advisories to the State of Gujarat and UT of Diu requesting them to take all precautionary measures with a view to ensure that no human life is lost, damage to vital infrastructure is minimized and to ensure early recovery of all essential services post-cyclone landfall. State/UT Governments have also been advised for timely evacuation of people from low-lying coastal and vulnerable areas.
How to check VAYU Cyclone Live updates::::
Gujarat and Diu Administration have planned to evacuate about 3 lakh people from the identified vulnerable areas starting the early morning of 12th June, 2019. The evacuated people will be shifted to around 700 cyclone/relief shelters. In consultation with State Administration, 39 NDRF Teams are being pre-positioned in and Diu for helping the State/UT Administration in evacuation, search, rescue and relief operations. In addition, 34 teams of Army are also put on stand-by.

Union Home Minister is regularly reviewing the situation and Union Home Secretary will take a review meeting on 12th June with the Central Ministries/Agencies and Chief Secretary/Adviser of Gujarat and Diu.
Cyclone Live updates ::::
nearly northwards and cross Gujarat coast between Porbandar and Mahuva around Veraval & Diu region as a Severe Cyclonic Storm with wind speed 110-120 kmph gusting to 135 kmph ...

Vayu cyclone effect Live On www.windy.com must watch share to all.
4/ 5
Oleh HappyToHelpTech
Prev Next Home