Night curfew from 8 pm in 20 cities of the state.

100 people can come to the wedding.

Large events will be postponed until April 30th.

Government offices will be closed on Saturdays until April 30th.
Prohibition of political, social events and gatherings. 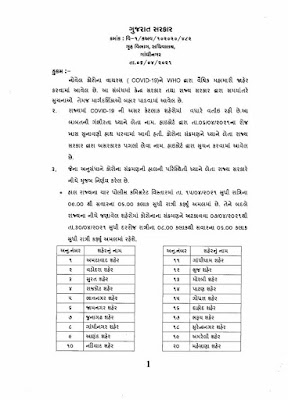 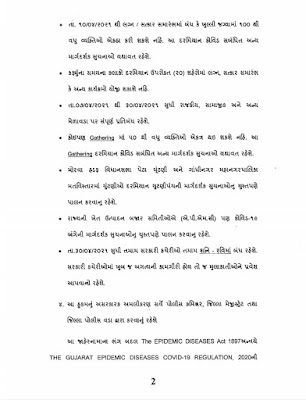 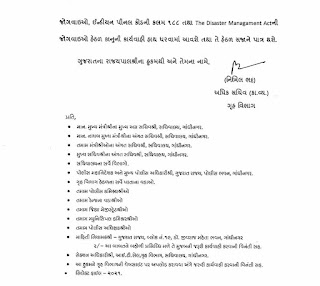 Gandhinagar: The Chief Minister addressed a press conference after a high-level meeting following the High Court's knock.  "Corona is angry," he told a news conference.  About 60 per cent of the total cases are coming from four metros.  Cases are also slowly increasing in other districts.  For the last one year we have been fighting against Corona with the cooperation of the people.  Given the corona atmosphere in the entire country today, it seems that the case will still grow.  But we need not fear it.

It may be mentioned here that the High Court, in view of the current situation in Gujarat, had asked the government to conduct a lockdown.  Following which the Chief Minister came to Gandhinagar from Surat and held a high level meeting.  After this meeting a very important decision was taken about the lockdown.  He will soon make an important announcement on whether there will be a lockdown by addressing the citizens jog.

In addition it has been decided to increase testing.  In addition tracing will also be given much importance.  An additional decision has also been taken regarding the containment zone.  The area to be decided by the Collector or Commissioner will be extended to the Micro Containment Zone.  This will prevent the transmission of corona.  Remedicivir injection The government has ordered 3 lakh injections.  The government is trying to get its supply running very fast.  Free in government hospitals.  Private hospitals will be provided on a profit or loss basis.  You will get as many injections as you need in 2 days where needed.

At a time when demand for oxygen has increased, the government has decided that those who produce oxygen will be reserved for the health department in respect of 70 per cent oxygen cores.  30 per cent will be provided for industrial use.  Extensive plans have been made to increase the number of beds.  Even small nursing homes are arranged to provide treatment for mild and asymmetrical people.  The Covid Care Center will be held at the Samaras Hostel and at the Community Center.  No ICU or oxygen facilities here.  Asymmetric and mild type of patient will be admitted.

The government has put all its resources to work.  Kidney Hospital today announced a new 800-bed hospital.  This will be increased where needed.  Today, the Hon'ble High Court has given advice and guidance to the government.

So far only four cities have had curfews.  Which has now been increased to 20.  Curfew will be in Junagadh, Jamnagar, Bhavnagar and Gandhinagar and four metros, Anand, Nadiad, Mehsana, Morbi, Patan, Godhra, Dahod, Bhuj, Gandhidham, Bharuch, Surendranagar and Amreli from 8 pm to 6 am.  We will issue a detailed notification in this regard.  So far 200 people were allowed in marriage which will now be reduced to 100 people.  Only 100 people can attend the wedding.  In addition, we postpone all political and social gatherings till April 30.

More than 50 can be done in any occasion.  No rules apply in Gandhinagar and Morwa Hadaf.  Political and social gatherings in other Gujarat will be completely banned.  No more than 50 people will be allowed.