Circular regarding the celebration of 26th January 2021 Republic Day

India is a federation of states.  It is an independent sovereign socialist democratic republic with a parliamentary system of government.  This republic is a government in accordance with the Constitution of India.

It was under British rule from 1757 to 1947.  The impact of economic, political and social exploitation during the British rule helped the gradual rise of the Indian independence movement to gain independence from foreign rule.  The movement, along with the Republic of Pakistan, formed the Republic of India on 15 August 1947, adopted the Constitution of India on 26 November 1949, and proclaimed India a sovereign, democratic republic, with effect from 26 January 1950. 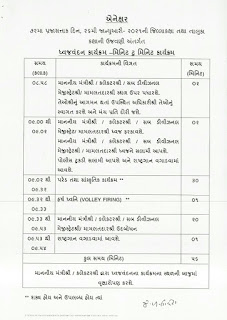 The Republic was celebrated in New Delhi on 26th January. The whole of Delhi is turned into a camp for this celebration.

January 26 is a public holiday for all schools and offices. Freedom rallies take place on the roads. Flag salutes are held in schools and sweets are distributed to children. And play a different game.