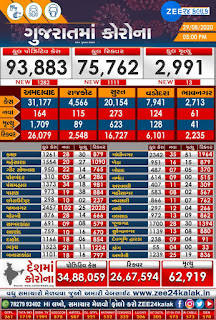 As many as 120 more cases of corona have been reported in Vadodara city and district today, according to figures released by the corporation. Thus the total number of positive cases has risen to 7818 and today the official death toll has risen to 139 with the death of 2 more patients. A further 101 patients have been discharged from the hospital in Vadodara today. So far a total of 6054 people have beaten Corona. Out of 1625 active cases in Vadodara, 161 patients are on oxygen and 65 patients are on ventilator and 1399 patients are in stable condition.


Corona cases were reported in these areas of Vadodara today


Currently 4112 people are quarantined in Vadodara


Highest 1945 cases in the North Zone