IPL Schedule 2020: Indian Premier League's full schedule is released by the BCCI. The 13th season of the VIVO IPL will commence on 29th March 2020. The first match of the IPL 2020 will be played between Mumbai Indians (MI) Vs Chennai Super Kings (CSK) at Wankhede Stadium, Mumbai on 29th March 2020. Read this article to know the full schedule, teams, venues and time table of IPL 2020.

The indian primiar League has advanced the 13th edition of the tournament by a week, rescheduling the starting date from September 26 to the 19th with the final to be held on November 8. Under this schedule, 60 matches will now be played in 51 days as against the 44-day window allotted earlier. 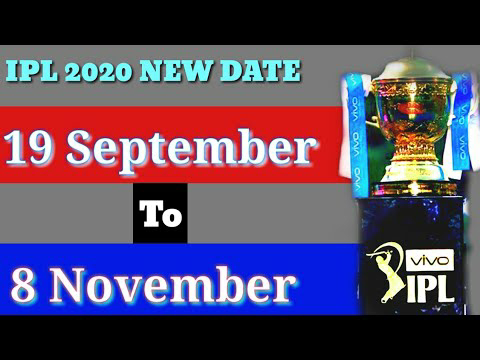 TOI had reported the rescheduling of dates on Wednesday, a day after broadcasters Star India conveyed they were "unhappy" with the scheduling. It can also be confirmed now the advancement of the league's starting date puts an end to all speculation surrounding the three-match white-ball series that was being planned against South Africa.

India will see in excess of 1,200 individuals flying to the UAE, should the two governments give the final nod, including overseas cricketers, match officials and commentators from other countries. "Of that, around 200 are just cricketers and that many more in terms of support staff, team management, executives handling franchise logistics and operations etc. So, let's say around 400-500 of them. As of now, the players are spread out in different parts of the country and the world. How to bring them all together to one location and make them fly? These are plans that need to be thoroughly worked out," say those in the know.

Take this scenario for instance: BCCI and IPL franchises are busy figuring ways to charter overseas cricketers, support staff, commentators and other officials from different parts of the world. Owners have been asked to "help" out with private planes. Processing of visas is about to begin at a neck-break speed. Hospitality is BCCI's least concern because franchises are "more than capable" of organising it on their own. Once the IPL lands in UAE, the real 'test' begins. "The ECB did a fabulous job in pulling off the series (vs West Indies). There are lessons to take from that. IPL's biggest responsibility will be to put a well-panned bio-secure bubble in place, of course with the help of authorities in UAE. In that lies the success of IPL's 13th edition. The winner of this year's league has to be the way in which it is conducted," sources say.
Prior to departure, every individual taking flight will undergo two tests for Covid within 72 hours and repeat the procedure upon arrival. "Anybody with the mildest of concerns will not take the flight. Upon landing, the next 72 hours will be spent in complete isolation and settling down. Then it will be for the UAE authorities and government's policies to guide us on further procedures," sources said.
One of the reasons IPL has settled for the UAE is that two grounds - in Abu Dhabi And Dubai are on the city outskirts. Secondly, the tournament will not require any air travel. Third, the government of UAE can be expected to extend full cooperation and has the experience of hosting the league back in 2014. Fourth, as industry executives put it, "if the IPL happens, it won't just help Indian cricket and thousands who depend on it. It will work in favour of the global cricketing ecosystem".
While IPL moving to UAE has become the central subject of discussion, franchises are sweating over how they haven't officially heard from the BCCI on this matter yet. "Whatever we're getting to know is mostly through media reports. This is scary. There are so many questions. How are the players going to fly? When? Are we supposed to do our own bookings? What about other operational procedures? These are not last-minute matters", three franchises told TOI. Teams are in the process of renegotiating sponsorships as confusion continues.
HappyToHelpTech