The total number of cases in the state has reached 35398

Number of patients discharged in the state today 473

Total number of active cases in the state 8057

Corona is no longer a specific hotspot in a state where the government has stopped testing or tracing a positive patient's infection, but the disease continues to spread throughout the district.

Gandhinagar.  Corona is exploding again in Gujarat.  While more than 600 cases are being registered in the state every day, the state health department is in a frenzy.  Experts believe that the corona is spreading in the state by becoming a hidden positive super spreader due to less testing behind the increasing cases.  But the government is in a hurry to show its success by playing a data game in Corona's case.

The discharged patient decreased
The discharge rate has declined from the same as before with the increase in Corona cases in the state.  340 people were discharged yesterday and the total number of discharges is 24941.  Thus, for the first time, the number of active cases in the state will exceed 10,000 and the death toll is likely to cross 2,000.  There are currently 9745 active cases.  At one stage in Ahmedabad, more than 300 new cases were coming in daily, which is now around 200.  Yesterday, 204 cases were reported in Ahmedabad, out of which 195 were from cities and 9 from districts. 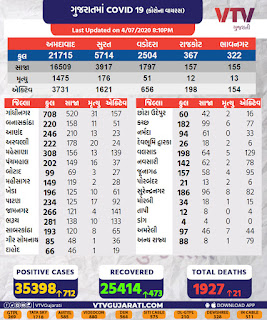 Gujarat in 10th position in Corona Test
The state government has ranked 10th in the country in the Corona Test.  Out of a total of 60 million people, 3,45,900 tests have been done so far in three months.  More tests have been done in Delhi than that.  8 lakh tests were also done in UP.  Andhra Pradesh has a population of 4.95 crore, with 9.71 lakh tests.  Thus, the government started working in Gujarat by increasing the transition to Ahmedabad of people with no test and positive people with latent symptoms.  But Korona was advancing in Saurashtra including Surat, Vadodara, Rajkot and also created a no-test situation there.

Hidden positives are coming out now
Gujarat showed little interest in finding out how many got a positive from contact tracing.  Due to which the transition has increased to Gujarat No.2.  However, by reducing the test, Korona's positive score was reduced and today Gujarat is at No. 4.  But there is no such thing as satisfaction.  Fewer cases are appearing in Gujarat due to non-testing, but it is now coming out that there are more hidden positives.  Gujarat is also behind in tracing.  In Mumbai, 10 contacts were tested behind 1 positive but in Gujarat it is only 2-3.  Cases increased in other states but were 'hidden-positive' in Gujarat and hence when Gujarat reached No. 4 in No. 2 Positive.