Join Telegram Group
Head teacher transfer data collect later letter gujarat education department
A letter has been issued by the Office of the Director of Primary Education, Gandhinagar on 17/6/2020.  In the letter it is directed to send the information of the transfer of the head teacher.  According to the circular, the number of start-up teachers who have been transferred in the last five years is to be reported to the Gandhinagar Director's Office.  During this period of five years, the information of the head teachers who have been transferred during the tenure of the primary district education officer as well as the information of which education officer has performed duty during that period should also be sent. 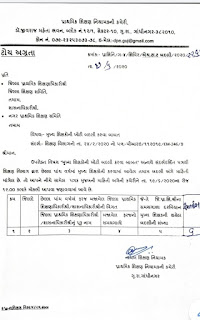