Corona virus is on the rise in India.  The number of corona patients has exceeded 1,86,000 and is steadily increasing.  A lockdown has been announced in the fight against the corona virus in India.  Unlock-1 has been implemented in the country and will remain in force till June 30.  The government has announced an economic package of Rs 20 lakh crore to help finance the lockdown.  The package amounts to 10 per cent of India's GDP.  The government says the economic package caters to all classes of people.  In Lockdown 4.0, two zones, Containment and Non-Containment, have been declared and exemptions have been granted accordingly.
Containment zone list of infected districts of the state regarding covid 19 announced 31-05-2020

The implementation of Lock Down 4.0 has started in the state of Gujarat from today.  In which many discounts have been given.  Chief Minister Vijay Rupani said in a public message that no concessions would be given in the containment zone except for essential items.  Shops will be allowed to open in the non-containment area from 8 am to 4 pm.  Accordingly, Surat Tantra has declared containment zone and non-containment zone.
A list of 43 different cluster zone areas of the city has been released.  In which 16 lakh 14 thousand 458 people have been included in the cluster area.  The order will have to be strictly followed in this area as per the declaration.
Containment zone list of infected districts of the state regarding covid 19 announced 31-05-2020

The containment areas in Surat include 4 areas of Central Zone, 10 areas of South East Zone, 2 areas of East-A Zone and 7 areas of Varachha Zone-A.  While 2 areas of South West Zone and 4 areas of South Zone Rander and 8 areas of South Zone Udhana have also been included.  South Zone Udhana 6, North Zone Katargam 2 areas Thus, a total of 43 containment zones of Surat have been declared.  While the remaining areas have been included in the non-containment zone.  Where public life will be throbbing as usual.  Shops will be open in the non-containment area from 8 a.m. to 4 p.m.
Know what will continue in the state and what will stop?
Lockdown-5.0 is starting from tomorrow, June 1 in Ahmedabad, which has been named 'Unlock-1'.  Restrictions will remain in place during Unlock-1, where Corona hotspots have been declared in this
Containment zone list of infected districts of the state regarding covid 19 announced 31-05-2020 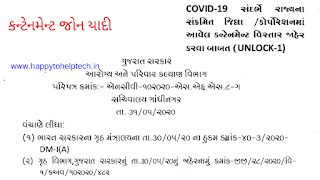