The total number of cases in the state has reached
12539

Deaths in the last 24 hours in Gujarat
30

Number of patients discharged in the state today
176

Containment zones - Non-containment zone areas divided into two parts
State Government Adopts Leading Strategies to Control Corona Transition as well as to give concessions to economic activities-daily life activities subject to guidelines
Guidelines will be implemented in the state from Tuesday 12th May to Sunday 21st May
-: CM: 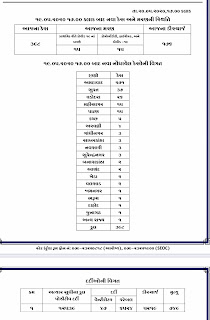 Thanks to Janata Janardhan for following the rules of cooperation in three phases of lockdown *
Poor-workers-daily earners-middle-class-farmers all have a holistic view-as well as being protected from corona to revive public life in the state - to revive trade and industry *
The fight against Corona is long - get along with everyone - cultivate good habits, we will defeat Corona *
N-95 and triple layer masks will be sold at reasonable prices from Amul Parlor in the state respectively at a reasonable price to make the masks easily available to the citizens *
In the first phase, after the sale of the mask in Ahmedabad, in stages, in other places of the state, one Nang N-95 mask will cost Rs.  3 and a triple layer mask of Rs.  Will be sold from Amul Parlor at the rate of 5  No concessions will be given in the Entertainment Zone except for essential items and essential services *
Contentment zone list subject to change based on number of cases *
Permission for sale of essential services and essentials in Contentment Zone area from all over Gujarat from 9 am to 3 pm *
Trade and employment can be continued from 8 am to 3 pm in areas other than contentment zones *
Curfew will be strictly enforced in the entire state from 6 pm to 8 am *.
Auto rickshaws will be allowed to run in the entire state except Ahmedabad and Surat *
All over Gujarat.  T.  Buses will be started but buses will not be allowed to come or go in Ahmedabad city *
Chief Minister Shri Vijaybhai Rupani has thanked all the citizens in the state for their cooperation in the steps taken to control the Koro epidemic.
In this regard, he said that he also applauded the service spirit of the doctors, police, nurse staff and cleaners who have been in a state of lockdown for 58 days.
The Chief Minister said that after following the rules of Lockdown 1, 2 and 3, now the Central Government has instructed the State Governments to implement Lockdown on the basis of Green, Red, Yellow and Orange Zones.
In Gujarat, the state government today announced guidelines for lockdown-2 in the presence of Deputy Chief Minister Shri Nitinbhai Patel and Minister of State for Home Affairs Shri Pradipsinh Jadeja with some exceptions in the rules on the basis of containment zones and non-containment zones in such zones
The public guidelines issued by the Chief Minister are mainly as follows: -
• No concessions will be given in the Contentment Zone except for essential goods and essential services.
The list of contentment zones will be subject to change based on the number of cases.
• Permission will be given for sale of essential services and essential items in the content zone area all over Gujarat from 9 am to 3 pm. 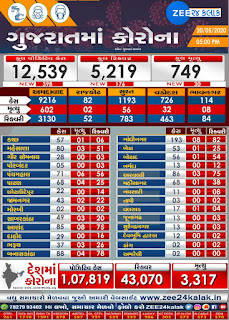 Trade and employment can be continued from 8 am to 3 pm in areas other than contentment zones.
As per the guideline of the Ministry of Home Affairs of the Government of India, curfew will be strictly enforced all over Gujarat from 6 pm to 8 am.
There will be no concessions in certain matters even outside the content zone.
• In these matters, educational institutions, coaching classes, gyms, swimming pools, gardens, shopping malls, theaters, religious and public gatherings and cultural events will be closed - no transition.
• Currently, hawkers, city bus services and private bus services other than the sale of vegetables and essentials are also not allowed.
Hotels will be closed unless used for health, police, government work or as a quarantine facility.
Large concessions will be given to activities outside the content zone.
Auto rickshaws will be allowed to run all over the state except Ahmedabad and Surat.
• These two cities will be decided in the second phase.
A maximum of two passengers can be accommodated in one rickshaw.
માં Shops in market area or shopping complex will have to be opened alternately according to odd and even number.
• That means 90% of the shops will be able to open on one day and 40% on the next day.
• No more than five customers can be in the shop at any one time.
Workers, shopkeepers or employees living in the contentment zone will not be able to move outside the contentment zone.
Economic activities, trade, business, offices will be allowed outside the content zone in Ahmedabad town west of Sabarmati river.
No such concessions have been given in the eastern areas of Ahmedabad metropolis.
• S. throughout Gujarat.  T.  Buses will be started but buses will not be allowed to come or go in Ahmedabad city.
A maximum of 30 persons will be allowed for the wedding ceremony.
30 persons will be allowed for the funeral of a deceased.
Leaf shops will be allowed outside the cantonment zone but only take away will be allowed.
• Barber shops - Beauty parlors and salons will be allowed to start on condition of adhering to social distance.
• Public libraries will be allowed to be started in the entire state with 50% capacity.
• Services of cab, taxi and cab aggregators will be allowed to run with a maximum of two passengers outside the content zone.
• But cab and taxi services will be closed in the eastern part of Ahmedabad city at present.
• Restaurants across the state may be maintained for the purpose of home delivery only.  But the person going for home delivery will also have to undergo a complete health check, health card so that he does not become a super spreader and the corona infection does not spread further.
Road side dhaba will also be allowed to run outside the city limit in the state.
Private offices with 5% capacity will also be allowed to operate in areas outside the content zone.
• But private offices in East Ahmedabad in Ahmedabad city will have to be kept closed for now.
• All repair shops, garages, workshops and service stations can be operated across the state except for content zones.
Private cars and two wheelers will get concessions in areas other than the content zone.
• One person in two wheeler and two persons in addition to the driver in four wheeler will be able to move around.
• Textile market can be started in Surat as per odd-even number.
• Diamond, weaving and power looms units will also be allowed to operate with 50 per cent staff but social distance will have to be complied with.
• Goods transport of goods will be allowed throughout Gujarat.
• These instructions - Guidelines will be in force for the period from Tuesday 14th May to Sunday 21st May.
•
• Along with all these instructions, a person who spit in public all over Gujarat will be fined Rs.  A fine of Rs 500 will be imposed and those who do not wear masks in public will also be fined Rs 500.
The Chief Minister also said that while masks have been made compulsory in public in the state, the state government has also made arrangements to make masks easily available to the people.
People who want to buy N-95 or triple layer mask for their own use can get it from Amul's milk parlor in the state.
In the first phase, after starting its sale in Ahmedabad metropolis, such masks will be sold from Amul parlors across the state.
He said that even such a mask costs Rs.  75 per mask and for triple layer mask Rs.  Has been kept.
The Chief Minister made it clear that the entire government is working day and night with concern for the health and safety of every citizen of the state as well as with a commitment to win the war against corona by boosting the immunity of the people.
He also appealed to all the citizens of the state to overcome this long battle by cultivating habits like using masks, social distance, frequent hand washing with soap, not going out of the house except for work to prevent corona infection.
The Chief Minister also appealed to the people to take special care of the elderly, the elderly, the seriously ill and the young children along with boosting the immunity of the people.
Important Link :-
Official website corona info gujarat
HappyToHelpTech