government will deposit Rs 500-500 in these Jandhan accounts

Join Telegram Group
Today, the government will deposit Rs 500-500 in these Jandhan accounts, find out when it can be withdrawn 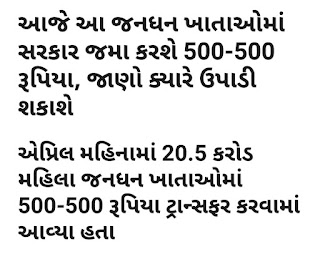 In April, Rs 500-500 was transferred to 20.5 crore Mahila Jandhan accounts
New Delhi: The second installment of Rs 500-500 will be credited to the accounts of women account holders of Pradhan Mantri Jandhan Yojana (PM Jan Dhan Yojana) under the Pradhan Mantri Garib Kalyan Package from today.  Money transfer to this account will be done according to the last number of Jandhan account.  The money will be transferred in 5 days.

It will help to follow the guidelines of social distance.  It may be noted that Rs 500-500 was transferred to 20.5 crore Mahila Jandhan accounts in April.
Lockdown extended till May 17 - The government has extended the lockdown till May 17.  However in the meantime some concessions have been made across the country.  To help the poor during the Kovid-19 crisis, Finance Minister Nirmala Sitharaman on March 26 announced a grant of Rs 500 per month to women Jandhan account holders for three months from April.

What is a time table?  - Jandhan beneficiary women are allowed to withdraw money based on their account number.  According to the information provided by the Finance Ministry, the rupee will be transferred to the accounts of the account holders whose account number ends at 0 or 1 on May 4.
Money will be transferred to 2nd and 3 digit accounts on 5th May, 4th and 5 digit accounts on 6th May.  The money will be credited to the accounts of 6th and 7th final women beneficiaries on May 8.  Account holders whose account numbers are 8 and 9 will receive the money on May 11.  You can withdraw money from your bank on any day after May 11.
How can you withdraw money?  - The government said, you can withdraw money through ATM machine near your home, close bank friend, CSPs, etc. and do not go to banks as far as possible.  As per the instructions of the Government of India, the use of ATMs during this lockdown is absolutely free.