Corona cases in the state have crossed the 2500 mark.  Gujarat ranks second after Maharashtra in terms of corona cases and deaths across the country.  The serious thing about the corona is that in some areas the corona is in the advanced stage.  So beyond stage two so the health department has also become concerned.  At present there are 15 hotspot areas in Gujarat which include Ahmedabad, Rajkot, Surat, Vadodara, Bhavnagar.  Now the worrying thing is that community transit in Gujarat's hotspot area may increase.
Corona's cases have crossed the 2500 mark

So far, Gujarat is in the second stage of Corona. Now more than 15 hot spots in Gujarat can enter the third stage of Corona.  If we look at the statistics, the proportion of cases in the hotspot area has been special. Out of the total cases, more than 50% of the cases are being registered only in the hotspot area which can prove to be dangerous.  As a result, the state health department has also decided to conduct rapid tests from tomorrow, especially in areas other than the hotspot area.  Health Secretary Dr. Jayanti Ravi said that most of the deaths in Gujarat are due to those who have more than one disease.
Worrying news for Gujaratis 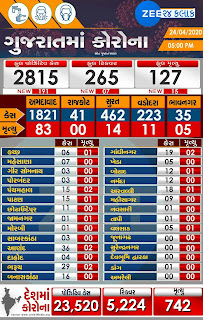 Three thousand corona will now be tested daily in Gujarat.  2500 tests will be done in different areas while 500 tests will be done for retest of positive patients.  At present, corona testing facility is available at 15 places in Gujarat.  In addition, rapid testing is being started from tomorrow.  Now that Corona is preparing to enter the third stage, people also need to take special precautions.