Gandhinagar. One more patient has died of coronas in Vadodara. A 60-year-old patient from the Karelibagh area has died from a corona virus. The patient died during treatment at SSG Hospital. It is worth mentioning that the number of coronary patients in Vadodara has increased to 145. While seven people have died. In addition, 2 more positive cases have been registered in Bhavnagar. With this the total number of positive patients in the state has increased to 1022. One of these two positive cases has killed a 60-year-old woman. State Policewada Shivanand Jha has said that curfew has been declared in Ahmedabad, Surat and later in Jangaleswar area of ​​Rajkot. Curfew will be implemented in this area from midnight. Curfew has been announced in an area with a population of 50 thousand. It will own three SRP companies in Rajkot. Horsemen will be patrolling in the coming river belt area, as people are flocking from the river belt area. Ahmedabad has registered 74 offenses during the curfew. In which 82 people have been arrested and 26 people have been arrested in Surat for 26 offenses.

Gujarat Corona update date 17-4-2020 evening 7:30pm
Most cases in newly registered cases in Ahmedabad
New 92 positive cases have been registered in the state. Ahmedabad has the highest number of cases, 45 in Ahmedabad, 14 in Surat, 9 in Vadodara, 8 in Bharuch. Two patients have died as well. 901 patients are stable and 8 patients are on ventilator. 1608 tests have been performed in 24 hours. Of these, 150 were positive, Health Principal Secretary Jayanti Ravi said. Another positive case has come up in Rajkot. Meanwhile, in Bharuch, four more cases came positive in the late night. Including a security guard and a 16-year-old teenager in Bharuch Civil Hospital. So far, a total of 17 positive corona cases have been reported in Bharuch district. A report from a Saudi man in Veerpur in Mahisagar district has come positive. This is the first positive case of Mahisagar district. The 28 Front Line Warriors are Corona-positive, all being treated.

Important events that took place from the morning of April 17 till now
>> One more patient was discharged after treatment in Rajkot
>> Seven patients were discharged in Patan
>> 8 policemen in Ahmedabad corona positive, 60 people contacted quarantined
>> Anand couple quarantined from Nadiadma Home Quarantine abducted, police conducted investigation
>> Curfew in Rajkot's Jangleshwar will be implemented from midnight today
>> Bootlegger Dadubha fled with a brother in a lockdown in Ahmedabad
>> Crime branch arrested by restaurant owner father and son in Vadodarama lockdown
>> Report of the son of the Superintendent of Ahmedabad Civil Positive
>> Dhoraji Police speeding up 3 youths who police pranked at TikTok in Dhoraji
>> A convoy of locals arrives at Gulbai Tekra, Ahmedabad
>> Corona test positive for 4 more doctors and one nurse at LG Hospital in Maninagar
The state has 1099 positive cases, 41 deaths and 73 discharges 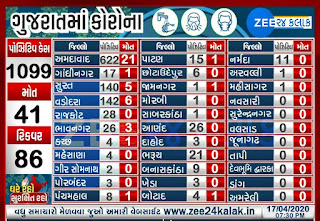