The Lokraxak Recruits Announce A New Merit List In The Women's Category 2020
In this Provisional Result, if any women candidates are concerned, they should have the office of the Police Recruitment Board, Bungalow no. G-1, Sarita will be able to come in front of Udhan, Sector-1, Gandhinagar, with the required evidence during the office hours. Submissions made after that will not be considered.
Of the women candidates who are included in the provisional result, the women candidates whose document verification is pending will be briefly examined. At the time of document verification all the candidates whose documents are valid will be available for appointment, and if any of the candidates' documents are invalid, action will be taken according to the rules. 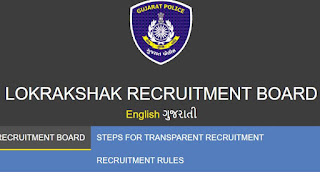 As per the details obtained, the written examination was taken on January 3 for the 3, 6 seats of the lrb board Subsequently, one and a half times the candidates who passed the exam were called for document verification after May 5th.  The recruitment board, on July 7, did not disclose the results after the process, saying that the verification will be completed in about three months as the caste certification is to be tested.
The process is likely to be completed within about 3 days, which is likely to be completed by the end of November. candidates waiting for sarkari Naukri result.
Thus, the total promise of 3 days and 3 days of declaration of lrb results by the lrb recruitment board has now been fulfilled, though no indication of declaration of lrb results has been made by the candidates themselves.