std 1 to 9 Maas promotion Decision by gujarat Govt. Due to Corona virus

std 1 to 9 Maas promotion Decision by gujarat Govt. Due to Corona virus

While the counting days for the annual exams are still pending in the schools from 1 to 8 and 9-11 in the state, all the schools in the state have been closed for 14 days due to the corona. The exams are now postponed. Due to this, the new semester also starts late.  The Board of Directors convened today to give mass promotion to the government from 1st to 9th.  July decided to start the presentation.  The Uttar Pradesh government has made a big decision because of the corona virus.  All students up to grade 8 will be allowed to go to the next standard without exams.  The circular has been issued by UP Chief Secretary Renuka Kumar.  The Uttar Pradesh government on Tuesday canceled all the state exams.  It has been decided to close the educational institution April 2.
Pass without examination 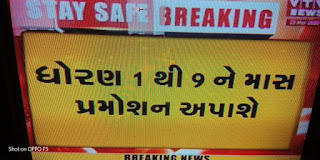 It was decided in the meeting of the Board of Directors of the school that, in view of the coronary virus and the ensuing potential impact, if required, given the mass promotion to the students of Std.  Introduction to the Government.
When does the session begin?

Since the schools opened on March 30, the new academic session was followed by a summer vacation instead of April 20, due to uncertainty about conducting exams and how late to conduct the next situation, as well as delaying the results and re-examining students who failed in Std. 5 and 8.  That is, seeking to start in June or the first week of July, as before.  In addition, the corona virus is spread by touch, the presence of students, academic and non-academic staff online and physical closure of the institutes where biometric.
What Are The Organizations Of Schools And Teachers? 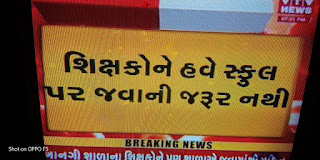 When the district's dean-private schools have less than 30 students, the district's DEO, which has been running the class-school closure for the past one month and has been ordered to close classes, wants private school trusts to run schools and pay teachers' salaries.  The government also authorized the government to keep the class-school guaranteed by taking a stamp paper of 300 rupees.  Will be introduced.  While old school records have been demanded from the old schools, the governing body has also relaxed the rules with the government and allowed the old school to be renewed only. 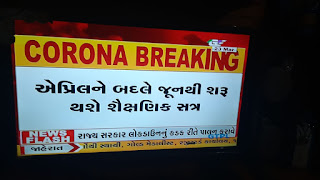 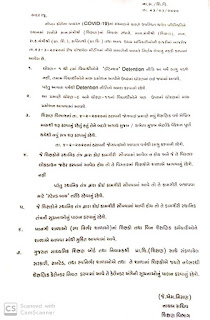