Gujarat na karmcharione moghavari bhatthama 5 taka no vadharo
Harrishankar Tiwari, former chairman of the All India Audit and Accounts Association, a former chairman of the AG Office Brotherhood, Allahabad, computing the DA and told Zee Business, that the inflation allowance is likely to increase by 5%.  Because, the Consumer Price Index (CPI) data for April, 2019 has increased inflation.  However, CPI figures for June 2019 are yet to come.
Will benefit most in 3 years 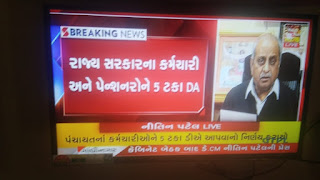 If the government takes this decision, the DA of employees will increase to 17%.  This will be the largest increase in DA since the 7th Pay Commission was implemented in 2016.  This means that the central employees will get the most benefit in 3 years.  State Employees Joint Conference, UP co-ordinator RK  Verma also said that DA is likely to rise this time, as the April data from the Consumer Price Index increased.
Gujarat na karmcharione moghavari bhatthama 5 taka no vadharo
The AICPI was 312 in April
The All India Consumer Price Index (AICPI) for May 2019 has risen to 314, which was 312 and 309 respectively in April and March 2019.  According to the data, on a monthly basis, DA was 13.39% in January, rising to 15.49% in April.  Harishankar Tiwari said that even if the AICPI increased by 1 point in June and remained stable at 314, DA would still increase by 5%.  If it does, the DA can be reduced to 4 percent.
DA increased 3 percent in January
In January 2019, the central government increased the inflation allowance by 3 percent.  At that time the AICPI was 307.  That is, on a monthly basis, DA was 13.39 percent.  Earlier in July 2019, DA increased by two per cent.  At that time AICPI was 301 and DA was 10.36 percent.  According to experts, if this index is increased by 2 points a month then DA will be calculated from 16 to 17 percent.