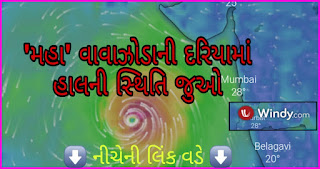 Cyclone Maha, the fourth cyclone this year in the Arabian Sea, is set to intensify further into an 'Severe Cyclonic Storm' in next six hours, said the India Meteorological Department (IMD). The depression that had developed in the Comorin Sea intensified into a cyclonic storm on Wednesday evening.
Cyclone Maha was located 10.6N 73.5E over Lakshadweep and adjoining area on Wednesday night. Maha continues to move northwestward across Lakshadweep Islands. It is forecast to intensify into a Cyclonic Storm on Thursday, and later intensify further into a Severe Cyclonic Storm.