From ancient times the office of the Mamlatdar has been given important status.  The word mamlatdar is derived from the original Arabic word "MUAMLA".  "Matter" means a malicious thing or a case and the officer who solves such matter or questions.  Mamlatdar is the revenue chief of a taluka composed of a group of 5 or more villages on average.
124 Mamalatdar change in gujarat pdf list download
According to Article 12 of the Land Revenue Act, the Mamlatdar is appointed by the State Government.  The following provisions have been made regarding the appointment and the duties and powers of the Mamlatdar.
Duties and Powers of Mamlatdar 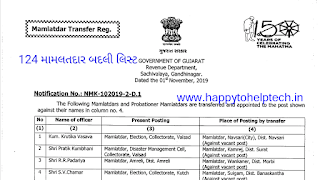 To handle the revenue administration of the taluka and to perform duties as the main co-ordinator of the taluka. Supervision and investigation of the functioning of the revenue staff of the taluka. The originator of any revenue chapter is the Mamlatdar office.  Except for questioning, the chapter is settled or a decision is made  The land is the Custodian.  Therefore, it is the fundamental responsibility of maintaining the land archive and updating it periodically.  It has a primary and fundamental responsibility for the maintenance of property, and the role of the Mamlatdar in resolving the issues arising on the basis of the property of the people and resolving the issues arising thereby. Maintaining government lands and taking care of such lands without pressure.  Prevention of theft of Government produce.  Regional vahikavata to as land revenue officer.  The system will be as efficient and honest as it is effective in the inspection of records / records. The administration of the office is always the duty of the caretaker to observe the provisions of the law and the rules under it and from time to time the permanent instructions of the Government.  Obligation to observe that office procedures are implemented efficiently for administrative functions.