The monsoon has taken off from the state but the farmers are getting bad news again. Even after the departure of the rains, the power of minimum rainfall has been expressed in different areas of Gujarat for the next three days. Scattered rains have been expressed in some parts of southern Gujarat and Saurashtra.

An Upper Cyclonic Circulation System has been activated in the Arabian Sea. The system will have an impact on Gujarat, which has raised concerns over the rains in Saurashtra and some places in South Gujarat from September 20 to 23.

According to the Meteorological Department, the system could also cause heavy rainfall in the coastal areas with heavy winds. On October 20, the rains can rain in the coastal areas of Tapi, Surat and Dang, in southern Gujarat. In addition, the sea at Porbandar in Saurashtra can be stormy. During October 21 and 23, there were concerns over how many places in Saurashtra and northern Gujarat were raining. 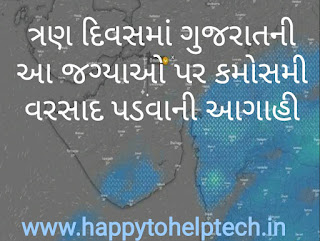 The rains are also threatening to damage the crops grown in the field. It is worth mentioning that, many monsoon crops have failed due to monsoon rains this year and now farmers are worried over the forecast of deficient rainfall again. The state government has also instructed the insurance companies to compensate the farmers as soon as possible for the loss to the farmers.