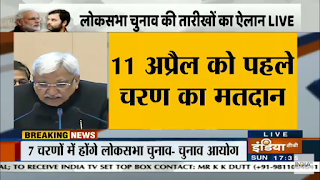 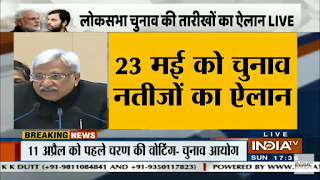 BREAKING NEWS: LOK SABHA ELECTION 2019 DATE DECLARE
Important announcement
There will be a VVPAT unit on all the polling stations
By the number 1950, the name of the voter list can be ascertained
Voting will be done on nearly one million polling stations, which is 10.1 percent more than the previous time 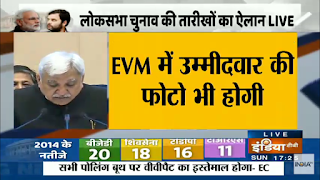 Keeping festivals and examinations in mind to announce dates of election
About 90 million voters will use their views
If the candidate leaves the form unfinished, his candidature will be canceled
Loud speaker can not be used from 10 am to 6 in the morning
Between one and a half million voters aged 18 to 19 years old
Assembly elections will be held in five states with the Lok Sabha.
Between the date of withdrawal from the date of the election to the date of voting, ideally 14 days of election campaign should be received.
Apart from this, there is a seven-day period between issuing the notification of the election and issuing a subscription.
Thus, for the formalities related to the electoral rolls, it is kept for at least 21 days.
The results of the 17th Lok Sabha elections have to be announced before May 2019.
BREAKING NEWS: LOK SABHA ELECTION 2019 DATE DECLARE
In 2014, the 16th Lok Sabha was formed, the announcement for the election program was announced on March 5.
On the 16th May, 72 days 'election cycle' was completed with election results.
The election program was announced on 2nd March for the formation of the 15th Lok Sabha in 2009.
The results were announced on 16th May, at which time the polling was held in five stages and the process lasted for 75 days.
Based on the instructions of the Central Election Commission, the process of replacing the chief secretaries of all the states (and Union Territories) It has been completed before 28th February.
BREAKING NEWS: LOK SABHA ELECTION 2019 DATE DECLARE
There are 26 Lok Sabha seats in Gujarat. During the 16th Lok Sabha, BJP got all the 26 seats.
This is the best performance of any party ever since the establishment of the state. The challenge will be to repeat the show against the BJP.
Prime Minister Narendra Modi contested from Vadodara in Gujarat, besides Varanasi of Uttar Pradesh and won both seats.
However, he later vacated the Vadodara seat and completed the term as an MP from the Varanasi seat.
Two of the 26 seats reserved for Scheduled Castes and four seats have been reserved for Scheduled Tribes.
BREAKING NEWS: LOK SABHA ELECTION 2019 DATE DECLARE
GUJARATI TAMAM MAHITI AHI JUO
HappyToHelpTech