Join Telegram Group
Today gujarat state Budget 2019  Nitin patel Declare
Gujarat Budget 2019 Declared : main topic of budget
Ahead of the General elections, Gujarat’s budget has something for all sections of the society
The Gujarat Government on Tuesday presented Vote-on-Account for the year 2019-20 with gross surplus estimates of ₹12,241.40 crore without any tax proposals.
Revenue receipts for the year 2019-20 is estimated at ₹1,54,885 crore, while revenue expenditure is estimated at ₹1,45,022 crore. 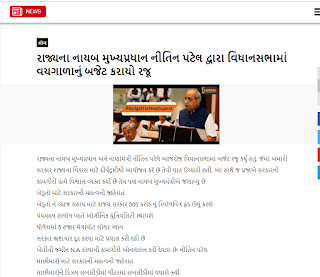 Ahead of the General elections, Gujarat’s budget has something for all sections of the society
The Gujarat Government on Tuesday presented Vote-on-Account for the year 2019-20 with gross surplus estimates of ₹12,241.40 crore without any tax proposals.
Revenue receipts for the year 2019-20 is estimated at ₹1,54,885 crore, while revenue expenditure is estimated at ₹1,45,022 crore.
State Deputy Chief Minister and Finance Minister Nitin Patel presented the budget in the Assembly today. In which our government had planned for the development of the state with a long history. With this, the people have expressed their faith in the performance of the government, the Deputy Chief Minister said
Government's important announcement for farmers
The state government will raise a revolving fund of Rs 500 crore for interest subsidy to farmers
Panchmahal will set up an Organic Unity at Halol
5 thousand MW solar plan in Dholera
The government is trying to remove corruption
The work of agriculture land N.A. has been done online: Nitin Patel
Government's important announcement for fishermen
Fisheries increase subsidy in liters in diesel subsidy
The fishery landing center will be built in Valsad
150 to 300 rupees increase in the daily allowance of fishermen's wages
Farmers of scarcity-hit taluka Payment of input of 1557 crore inputs
TAPI Karjhan Leak Pipe Line will cost Rs. 715 crores
Payment of Rs. 40.84 crore in Pancharpole and Gaushalas
result date, Digital Guajat,Digital India, Digital Guajrat Scholarship.
Widowed widow widow's 250 pence
In the last two years, more than 27 lakh farmers were covered under the Prime Minister's Fiscal Insurance Scheme
500 crore revolving fund will be set up to help farmers get together with interest subsidy
Establishment of Organic University at Halol in Panchmahal
Plantation of horticultural crops to be taken up to 18.55 lakh hectares and up to 300 lakh metric tones by 2022
Covering 53 lakh hectares of 27 lakh farmers under the scheme of insurance under the Prime Minister's Fiscal Insurance Scheme in two years.
A revolving fund of Rs 500 crore has been earmarked for the purpose of timely payment of interest to the farme
Health
Increase in the income of 3751 Asha Fissile sisters in the state
Monthly increase of Rs. 2 thousand
Ma Vaishaxay Plan
In the Vaisacalay scheme, income from income tax has increased from Rs 3 lakh to Rs 4 lakh
Other 15 lakh families in the state will get benefit from this scheme
More than 3 medical colleges will be set up in the state
Medical College will be established in Navsari-Amreli and Visnagar
Road and building department
Rs. 2 thousand crore for road-road allocation in 2019-20
Construction of roads under the Chief Minister's Gram Sadak Yojana
Road and bridges construction work will be completed soon
The state government has provided Rs. 150 crores for various corporations
A provision of Rs.6845 crore for the Narmada project in 2019-20
Rs. 430 crore has been allocated for the construction of canal network in Kutch
Rs. 146 crore has been allocated for underground pipeline
Rs. 316 crore has been allocated for expansion of 3 pumping stations of branch canal
In Rajpipla, the Birla Munda Tribunal Unit will spend 300 crores
Work of Garudeshwar National Tribal Museum will be started
Free textbooks, restaurants and hostels to the students of the Chief Minister's Yuva Swabhamban Yojana at a cost of Rs. 1055 crore
GUJARATI BUDGET mahiti ahi vancho
HappyToHelpTech