India Record deaths from corona in the country

India Record deaths from corona in the country: 4,191 deaths in 24 hours for the first time, more than 4 lakh cases for the third day in a row; The relief is that 3.19 lakh people recovered

The second wave of corona in the country is becoming dangerous. In the last 24 hours, 4 lakh 1 thousand 228 new cases were reported in the country. While 3 lakh 19 thousand 469 people recovered and 4,191 people died. The epidemic is the deadliest in a single day.

It is also a matter of concern that more than 4 lakh cases are coming to the country for three consecutive days. Earlier, 4.14 lakh patients tested positive on May 7 and 4.13 lakh on May 6. 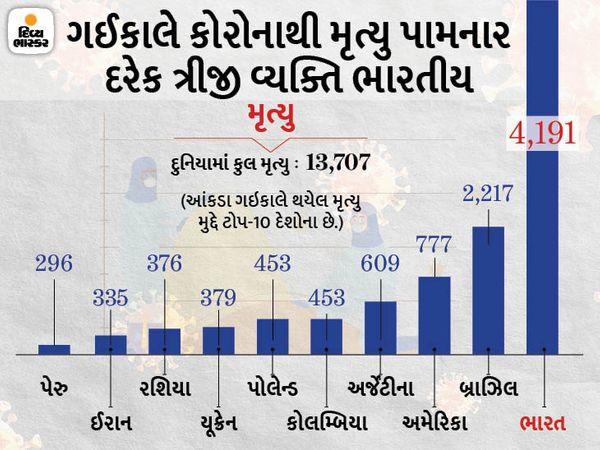 The central government has decided that 5 million doses of the covshield vaccine kept for shipment to the UK will no longer be exported. Instead, the vaccine will be given to people aged 18 to 44 in the country.

Amid rising corona cases, India is getting help from all over the world. So far 4,468 Oxygen Concentrators, 3,417 Oxygen Cylinders, 13 Oxygen Generation Plants, 3,921 Ventilators / Bypaps / Cipaps and more than 3 lakh vials of Remedesivir Injection have been recovered from various countries.

"If we take strict action, the third wave of corona may or may not come everywhere," said Vijay Raghavan, principal scientific adviser. Much of this depends on how effectively the guideline is implemented at the local level, in states, districts and cities.

Hospitals, clinics and Kovid Care Centers treating Koro patients will now be able to take payment cash of more than Rs two lakh. The central government approved it on Friday. The exemption will last until May 31.

A 15-day curfew has been imposed in Goa in view of Corona. It will start on Sunday. State CM Pramod Sawant gave this information on Friday.