At least 13 people, including a child, were killed when the driver of a highway truck hit more than 20 laborers lying on the sidewalk of a box drain on the road from Kim Char Rasta in Surat district. While more than 6 have been shifted to the hospital for treatment.


Farmers are going to hold a huge tractor rally in Delhi on January 26. Throughout the case, the apex court had said that the police were free to decide whether to allow farmers to enter Delhi. While the farmers have also declared that holding a tractor rally is a constitutional right of the farmers and no one can stop it. This is likely to lead to clashes between police and farmers on the 26th. 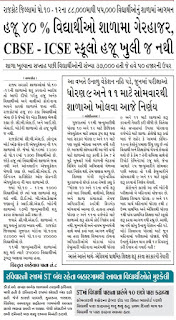 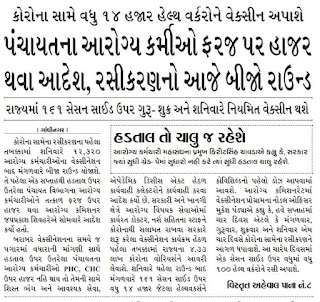 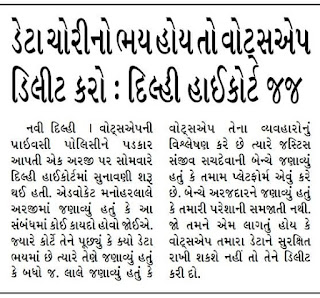 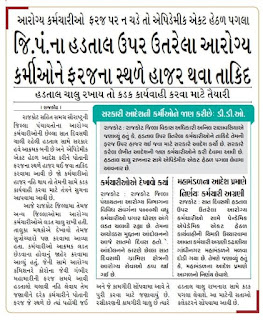 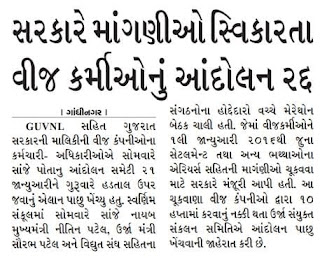 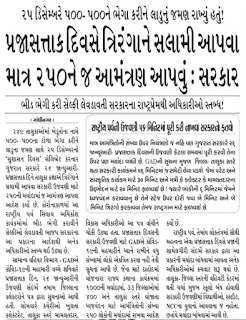 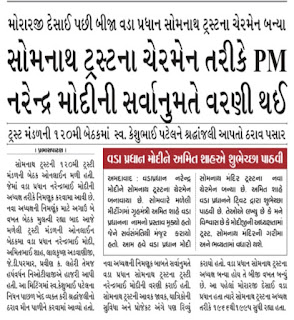 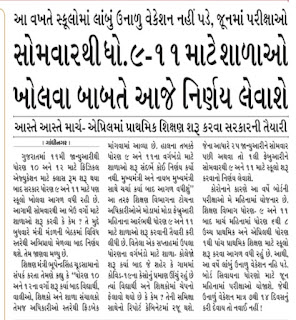 On Monday, the apex court told the Center that the farmers' tractor rally in Delhi was a matter of law and order. So the Delhi Police is free to decide whether to allow farmers to enter Delhi or not. The Center had filed a petition in the Supreme Court seeking an order to stop the farmers' tractor rally. Following which the Supreme Court made this clarification and everything is now laid on the police. 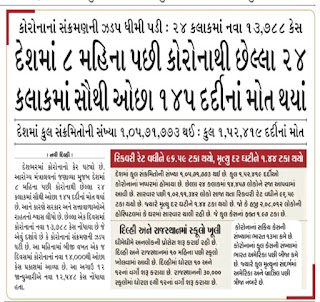 A bench headed by Chief Justice C A Bobde asked Attorney General KK Venugopal what authority the police have and what action should they take? We will not give any such order to the police. A further hearing in the case will be held on January 20.

On the other hand, farmers have clashed with Delhi Police in the past. There is a possibility of another clash on the 26th. Paramjit Singh, General Secretary, Punjab, Indian Farmers Union, Lakhowal, said that the farmers were not going to hold the tractor rally in sensitive areas like Rajghat on the 26th but on the Outer Ring Road.

Asked what he would do if the police did not allow it, the farmer leader said it was the farmers' constitutional right to hold a tractor rally peacefully. Vaccination is currently underway amid the Corona epidemic.

People of different ideologies claim to have joined the movement

No compromise due to external interference in peasant movement: Center

Farmers are demanding repeal of agricultural laws while the government says we will not repeal the laws but are ready to amend. In the midst of this situation, the government has now claimed that it is ready for a compromise from both sides but some ideologies are not allowing this to happen. An important meeting between the farmers and the government is going to be held on the 19th.

This will be the 10th round of talks between the two. Earlier, the government had claimed that both the farmers and the government wanted redressal but some ideologies were not allowing this to happen and were delaying it. State Agriculture Minister Parshottam Rupala claimed that direct talks with farmers are more likely to be resolved sooner than talks with farmer leaders.

At the same time, he claimed that there has been an attempt to prolong the dialogue since people with different ideologies joined the movement. People with this ideology want a solution according to their own will. Efforts are being made by both sides to find a solution but their issues are different. I hope that this matter will be resolved as soon as possible.

Several women's organizations in Delhi have also supported the farmers 'movement and joined the picket and also celebrated Women's Farmers' Day. The All India Democratic Women's Association said the agricultural laws would have a positive impact on women's lives. While WomenFarmersAgainstlo was trending on social media with the hashtag. Kisan Ekta Morcha appealed to people to post with this hashgate,

WhatsApp and its proprietary company Facebook claim that no one can read the messages sent in WhatsApp except the sender and recipient. Cyber ​​security experts do not believe that claim.

Anyone who objects to WhatsApp's policy or has a privacy complaint should stop using WhatsApp. The court said that Google Map and other online services only collect data, who should be banned?

However, users are now cautious and fed up with WhatsApp's confusing and controversial policy. That's why we have turned to messaging apps like Cygnus and Telegram.

"After the WhatsApp controversy, we are getting the most downloading from India," Signal founder Brian Acton said in an interview. It is gratifying that the citizens of India are wary of privacy. He said the rate of signal downloads is steadily increasing.

Bryan said the Signal app is one that doesn't ask for details other than the number of users. We have no reason to spy on shared photos, videos, audio, chats, etc., as we have established a company not a foundation, which runs on donations. We don't need to monetize user data.

The Act also added that it is currently available in ten languages. It also includes Gujarati. While we had to develop special wallpapers and animated stickers for India as it was in great demand. Still working on it. In addition, other features as needed will be added soon.

Rajasekhara wrote in his post that the reason why WhatsApp chat was found in Google is the negligence of both Google and Facebook. This is the second time since the Cambridge Analytica scandal that WhatsApp-Facebook claims to be safe, but there is no real security measure.

The guidelines for reopening schools were issued as per the Unlock 5.0 Guideline issued by the Union Ministry of Education on October 5. Schools and coaching institutes can be opened in a series of directions as per the guidelines issued by the Center. However the decision to open educational institutions has been left to the states and union territories. Since then, some regions have started making decisions in this regard.

New Delhi: As per the Unlock 5.0 Guideline issued by the Union Ministry of Education on October 5, guidelines for reopening schools were announced. Schools and coaching institutes can be opened in a series of directions as per the guidelines issued by the Center. However the decision to open educational institutions has been left to the states and union territories. Since then, some regions have started making decisions in this regard

In Uttarakhand, the decision to reopen schools in phases is yet to be finalized, but the government has decided on the responsibility of the schools. State government spokesperson and cabinet minister Madan Kaushik said in a statement that although the responsibility of stopping the spread of Kovid-19 could not be placed on schools alone, it did not mean that the school management and the district education department could escape their responsibility. The school cannot escape by placing its responsibility on the parents. He said the authorities would be responsible for the safety of the children as well as the schools. All rules will be followed by schools, including the safety of children and maintaining social distance


The Delhi government has kept schools closed till October 31 due to the coronavirus epidemic, despite guidelines issued by the Center to reopen them from October 15. Some schools in NCR have allowed 9th to 12th standard students to come to school voluntarily. The NCR covers the whole of Delhi and some districts of Haryana, Uttar Pradesh and Rajasthan.


It is pertinent to mention here that on October 3, the Home Ministry decided to grant concessions in some areas outside the containment zone. The new rules have been formulated after feedback from the State and Union Territories and extensive discussions with the concerned Union Ministries and Departments.

Guide for schools
Attempts to normalize public life amid the Corona virus epidemic continue. From September 21 where states were allowed to run from standard 9 to 12. There, now after October 15, the Ministry of Education of the Government of India has given permission to open schools (schools reopen), colleges. However, whether to open it or not will depend on the state government. The Ministry of Education has tweeted about the guidelines for Unlock 5.0 and informed everything from the area. However, at present this exemption is given only for areas falling in the non-containment zone. The date from when the schools will open will be decided by the state governments.

The Ministry of Education has issued guidelines on opening schools and higher educational institutions. Based on which the states will have to frame their own guidelines. The Standard Operating Procedure (SOP) for opening schools has come out earlier. In which detailed information about the precautions related to Kovid is given. Let us know what is in the new guidelines.

Online / distance learning will be prioritized and promoted.
If a student wants to attend an online class they can be allowed to do so.
Students can come to school / coaching class only with the written permission of parents. No pressure of presence should be put on them.
The state will prepare its own SOP based on the SOP of the Department of Education for Health and Safety.
Any school that opens must comply with the SOP of the state education department.
Rules for opening colleges and higher education institutions
The Department of Higher Education will decide when colleges and higher education institutions will open. Talks will be held with the Home Ministry for this. The guidelines of the education department are as follows

Concerns among companies over WhatsApp turmoil

WhatsApp is used by various companies to serve their customers. WhatsApp is used by companies to deliver some important information to their customers. But companies have also been concerned about WhatsApp's negligence on privacy issues. Companies are also investigating which apps can be used as an alternative to WhatsApp. Some companies have also launched independent investigations into WhatsApp's security for its reputation.