Maruti Suzuki sold a total of 1,82,448 vehicles in the domestic market 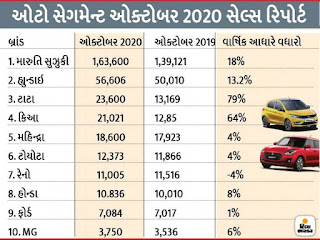 India's automobile industry is recovering rapidly. This can be estimated by looking at its sales figures. In October 2020, car companies have introduced discounts, special editions and attractive trim lails to attract more customers and give each other tough competition during the festive season. On Sunday, almost all automobile companies, including Tata-Hyundai and Maruti Suzuki, released their October sales figures.

Maruti has sold a total of 1,82,448 vehicles in the domestic market. Which means the company has grown 18.9% year-on-year. Tata Motors grew 79% year-on-year, while Hyundai grew 13%. Volkswagen, Nissan and Renault are down 38% year-on-year.


Maruti Suzuki India Limited (MSIL) on Sunday released its domestic sales figures. The company reported total sales of 1,82,448 units, an increase of 18.9% year-on-year, including 1,66,825 units for domestic sales and 6,037 units for other OEMs (Toyota Glenza and Urban Cruiser).

In addition, the country's largest automobile company exported 9,586 units in October 2020. The Alto and S-Presso sold 28,642 units in the mini segment, while the compact range of WagonR, Swift, Cellario, Ignis, Blaeno, Dzire and Tour S sold 95,067 units with growth of 26.6%.

Tata Motors has made a good comeback since last month. The new range of product based on Impact Design philosophy and new platforms definitely sets a high standard. In October 2020, Tata sold a total of 23,600 vehicles.

The company sold 13,169 units during the same period last year. That means the company has an annual growth of 79%, which is higher than all car manufacturers.

Hyundai Motor India Limited (HMIL) has announced domestic sales figures for October 2020. The auto sector has been showing good growth in the last 4 months and the company is seeing a rapid recovery.

Tata Motors has been hit again after a three-month year-on-year increase in sales. Indian makers also finished third last month with the highest year-over-year increase. Sold 23,600 units last month, up from 13,169 units in the same period in 2019. Sales increased 79%.

The company finished fourth with 21,021 units due to the good response to Kia's compact SUV Sonnet. Sonnet and Celtos are setting a new standard in their segment and its impact is visible on the sales chart. The company reported a 64% year-on-year increase to 21,021 units against 12,854 units in October. 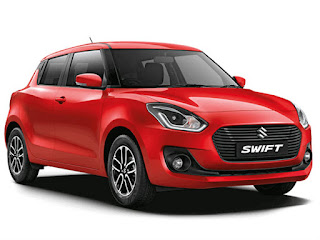 Mahindra & Mahindra is in fifth place with 18,600 units, while the volume increased by 4% with 17,923 units. The company released the second generation Thar on October 2 and its bookings have crossed the 15,000 unit mark. The company is now working on strengthening its domestic portfolio with the launch of the next generation XUV500 and Scorpio in the first 6 months of next year. 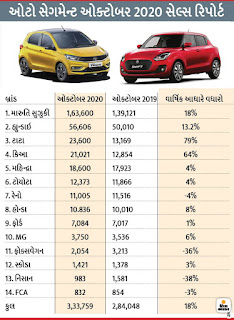