-->
Home / latest News / LIFE STYLE / The rural people of Gujarat do not have to go to government offices frequently, 22 services were made online

The rural people of Gujarat do not have to go to government offices frequently, 22 services were made online

Join Telegram Group
The rural people of Gujarat do not have to go to government offices frequently, 22 services were made online.
The most important thing in the digital service bridge is that connections will be provided through optical fiber network so that high speed internet of 100 MBPS is easily available in the villages of the state.
So far, 42 km panchayats of 27 districts have been covered by 31 km underground optical fiber network.
Not only that, every gram panchayat is connected to the state data center.  Thus, the innovative concept of making the villages of Gujarat a mini secretariat has been adopted in this digital service bridge.
From now on, services like registration, enrollment or correction or getting duplicate ration card, income proof, senior citizen sample, criminal certificate, caste certificate only from the service center of gram panchayat service from gram panchayat office.  You will get a nominal fee of Rs.
It has also made a radical decision that rural citizens do not have to go to the taluka level or town notary in the town for affidavits for such instances.
Powers will be given to the Gram Panchayat Talati cum Minister at the village level to affidavit the affidavit to be done as per the provisions of Section 3 of the Oaths Act, 1969.  So that affidavits can be made available to the rural citizens from the village itself in the gram panchayat. 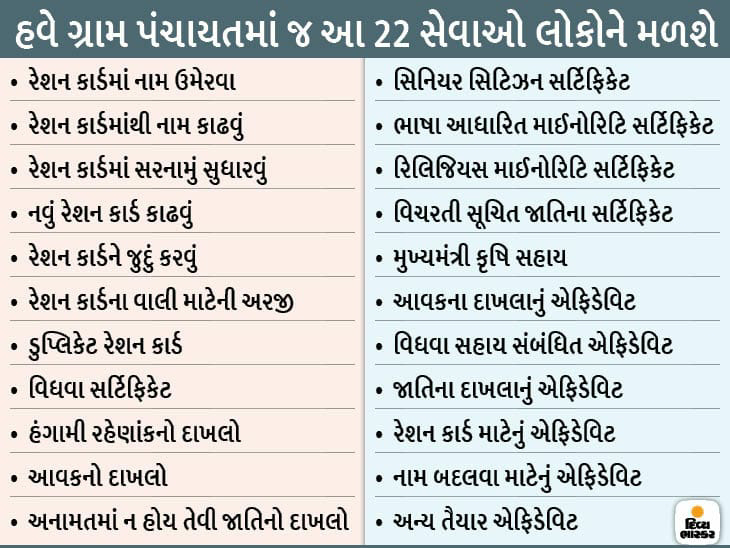 In remote rural areas of the state, it has been decided to start an innovative experiment of digital service bridge in the state using modern technology so that the public interest services of various departments of the government are available from the village level to the gram panchayat itself.  Rural citizens do not have to rush to the taluka-district headquarters for day-to-day services or certificates, for example, time and round-trip vehicle rental costs are saved as well as a variety of services at the primary stage with prices that do not go wrong.  It has been decided to start in 2 thousand gram panchayats from next 5th October by covering Sevasetu.  It is decided to cover more than 6000 gram panchayats in this digital service bridge by December 2020. 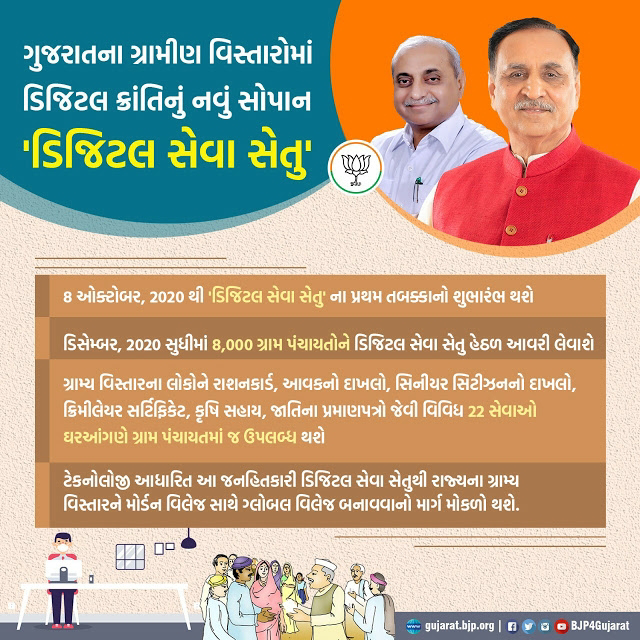 The rural people of Gujarat do not have to go to government offices frequently, 22 services were made online
Important Link :-
Gujarati Mahiti Read Click Here
Source by zee 24 kalak mews channel
About this, Chief Minister Vijay Rupani said that an affidavit regarding this service can be made to Talati.  You no longer need to go to a notary for that.  The state government has decided to give the power of affidavit to Talati for these services.  3500 villages are to be placed on this platform, though 2700 villages have been included due to by-election work.  Gujarat will be the only and first state in India to provide such service.  14000 gram panchayats will be phased out.  All gram panchayats will be covered by next year.  This is a total project of Rs 2,000 crore, in which 90 per cent of the cost is borne by the central government, and 10 per cent by the state government.
At the time of making this announcement, Chief Minister Vijay Rupani has claimed that the least corruption is in Gujarat.  He said that while Gujarat has got a weapon like digital service bridge to reduce corruption, corruption will be reduced in the coming days.
HappyToHelpTech

The rural people of Gujarat do not have to go to government offices frequently, 22 services were made online
4/ 5
Oleh HappyToHelpTech
Prev Next Home