Home / latest News / Scam in recruitment of 69 thousand teachers, who came top with 95% marks doesnot even know the name of the President

Scam in recruitment of 69 thousand teachers, who came top with 95% marks doesnot even know the name of the President

Scam in recruitment of 69 thousand teachers, who came top with 95% marks doesn't even know the name of the President

President's name is not known and the gang made him a genius, jailed 11 including Sargana
Dharmendra Patel, the topper of the teacher recruitment exam, works as a DJ at the wedding
Dharmendra calls on the name of the job is also accused of taking the money, police arrested four days ago
69000 Teacher Recruitment fraud:

Lucknow.  In Uttar Pradesh, a scam has come to light in the recruitment of 69 thousand teachers.  Dharmendra Patel, the topper of the Assistant Teacher Recruitment Examination, has no idea who the President of the country is.  Dharmendra works as a DJ at weddings.  He is now in police custody.  The STF (Special Task Force) is investigating the recruitment process following a court order.

Topper couldn't even answer simple questions
Prayagraj police arrested Dharmendra and nine others on Sunday on charges of taking bribes in the name of giving them jobs.  Three of them are candidates who will pass the recruitment exam.

An official said Dharmendra could not even answer simple questions of General Knowledge in the interrogation.  SSP Satyartha Aniruddha Pankaj says the main accused in the recruitment scam is KL Patel.  He has also been a member of District Panchayat before.
69000 Teacher Recruitment fraud:

Education Minister Satish Chandra Dwivedi on Tuesday said the recruitment process was halted following a High Court order.  A special police task force is investigating the case.
The controversy started even before the result came
The recruitment process started in December 2018.  However, due to the controversy, the case went to court.  Just a day after the exam, the government has fixed a minimum cut of 65 per cent for the general category and 60 per cent for the reserve category.  Earlier, when 68,500 posts were filled, the cut-off was 45 per cent for general and 40 per cent for reserve.
The decision to change the cut-off was challenged by the candidates in court.  Because of this the result took a long time.  The result was announced on the 13th of last month.

Prayagraj (Tarachandra Gupta).  69000 Teacher Recruitment fraud: A big scam has come to light in the case of recruitment of 69000 assistant teachers in the council schools of UP.  Here, shocking facts have come to light after the gang that broke the integrity of the exam was exposed.  This gang made the candidate Dharmendra Patel, a resident of Chhatauna village of Sarayammarej in Prayagraj, meritorious by getting 142 marks out of 150 while this candidate could not even tell the police officers the name of the President of India.  The official list of toppers of this exam has not been released, but the candidates state that the one who got 144 marks in the written exam will have topped.

Dharmendra has admitted before the police that he had paid Rs 8 lakh to KL Patel, the gang boss, for passing the written test for teacher recruitment.  Vinod Yadav, a candidate from Atrai village in Sikrara police station area of ​​Jaunpur, who got 123 marks out of 150, has accepted to pay Rs 12 lakh for passing.  In this forgery, Bahria resident school manager of police Prayagraj and former Zila Panchayat member KL Patel, Rudrapati Dubey of Bhadohi, Dharmendra Saroj of Mandhata Pratapgarh, Ranjit Saroj of Nawabganj of Prayagraj, Shashi Prakash Saroj and his father Harikrishna Saroj, Kamal Patel of Holagarh,
69000 Teacher Recruitment fraud: 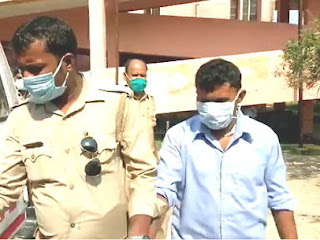 Scam in recruitment of 69 thousand teachers, who came top with 95% marks doesnot even know the name of the President
4/ 5
Oleh HappyToHelpTech
Prev Next Home