Home / General Knowledge / LIFE STYLE / What is the SC-ST Atrocity Act Law? Why not get bail in Atrocity? Learn atrocity law information.

What is the SC-ST Atrocity Act Law? Why not get bail in Atrocity? Learn atrocity law information.

What is the SC-ST Atrocity Act Law?  Why not get bail in Atrocity?  Learn atrocity law information.

No one is aware of the incidents of atrocities against Dalits and tribals.  Do you know what the Atrocity Act is all about when we want to see the incidence of Dalit atrocities in the Rogers print?  How is it provisioned?  How much punishment is provided in this law?  What rights have been given to the victim, etc. At present, everything has been tried to convey to you through Gujarat.
Why the Atrocity Act?
Despite all the socioeconomic changes of the Scheduled Castes and Tribes, their status has not changed.  There are numerous cases of social cruelty in which SC / ST members have lost their lives along with their property, whenever these people talk about their rights and oppose any wrongdoing, powerful people try to defeat them.  Apart from this, influential people humiliate people whenever they belong to the SC-ST community when it comes to the self-esteem of themselves and their women.  The law in which such alredy existed was undermined by the provisions of the Civil Rights Act-1955 and the Indian Penal Code to provide justice to SC / ST members, thus creating the need for a drafting law to punish those who tortured SC / ST.  Thus, to set up special courts and special courts to prevent crimes of atrocities against members of the Scheduled Castes and Scheduled Tribes, and to set up special courts and special courts, as well as to relieve the members or family or groups of the victims of atrocities and to rehabilitate them with such incidents.  To enact this law for the purpose of making appropriate legal provision for allied matters  Is not.
What is the Atrocity Act?
The law of the Scheduled Castes and Scheduled Tribes (Prevention of Atrocities) Act, 1989, was passed in the Parliament of India and was applied to all the countries except Kashmir.  In addition, the government made some amendments to the Act in 2016 and new provisions with more stringent provisions came into force on April 14, 2016.  This law applies to all persons who are not members of the scheduled caste.  Who.  If a person is harassing a member of the SC-ST community, legal action is taken against him under the Scheduled Castes and Scheduled Tribes (Prevention of Atrocities) Act, 1989.  In addition to the IPC clauses, he has been convicted under the SC-ST Act for the crime.  This law provides special protection to victims. 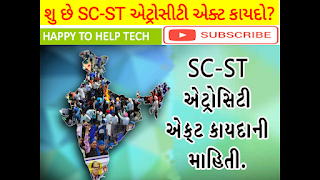 When does this law apply?
SC-ST people are publicly humiliated and coerced into urinating, social exclusion, refusing to do business with SC-ST people or not being offered jobs or work as SC-ST, beating SC-ST, grabbing land,  Complaints of any kind of harassment, including being forced to beg, making forced labor, stopping them from voting in elections or forcing them to vote, to stop going to a public place.  Adjustment This law applies.
According to Article 1 (1) (A), forcing a member of SC / ST to eat unhealthy food or forcing such a person to eat such food as per clause-1 (1) (B) in a place occupied by a member of SC / ST.  Debris, garbage, animal carcasses or any other abominable substance. Defeat a shoe to any member of SC / ST as per clause-1 (1) (D) or to SC / ST in the case of naked or semi-public, SC / ST.  Offensive acts of honor such as forcibly removing a person from a ST, forcibly shaving his head, shaving his head, dyeing his body or mouth, etc. are owned by a member of SC / ST as per clause 3 (1) (F).  Illegally occupy or cultivate or transfer land that has been or has been allotted or reported to be allotted. According to Clause 1 (3) (i), any member of SC / ST may be disposed of or taken to human or animal manure.  Forced to go or dig graves. According to Article-1 (1) (J), a member of SC / ST should perform human cleansing work at hand or for the purpose a woman of SC / ST pursuant to Article-1 (1) (K).  In the deity, temple or religious place of Goddess or other such practice, as per Schedule 1 (1) (l), no member of SC / ST can vote, not vote, not stand for election, or withdraw form, compel, intimidate.  Or intimidation. According to Article 1 (1) (P), the police shall make a complaint or other action against a member of SC / ST for any wrong, malicious, or harassing etc. All such things are punishable under this Act.  Is a crime.
In addition, SC / ST members should boycott social or economic activities, prevent them from availing any government service, have elected representatives and obstruct their work, publicly insult, speak racial profanity, spread hatred against SC / ST members, force them to leave the village,  Preventing motorcycle or car driving, preventing wedding procession, preventing entry to any school / hospital / shop / hotel etc.  The project is made.
What is the provision of punishment?
As per the provisions of the Torture Act, there have been provisions ranging from six months jail to five years and penalties for various offenses.  Apart from this, there are special provisions like that any person who is not a member of SC / ST as per Kalam-1 Act may be acquitted of immovable or immovable property of the accused who has been used in the crime by ordering a judge when he is found guilty in court.  According to Article 1, it is proved in the court that if the offender has been financially assisted by another person, then the person is also accused.  The accused will be taken as well as if it is proved in court that the accused himself or his family was aware, he will be considered to have committed this act intentionally. According to Article 1, the government collectively opposes SC / ST members on the village, community or community.  According to Article 1, the perpetrator of the Atrocity Act cannot be granted bail in advance.
Thus, in addition to the IPC conviction in the case of atrocity, the SC-ST Act has separately imposed punishment and penalties for six months to life term.  If a government official commits a crime, the IPC can be punished for 6 months to 1 year under the Atrocity Act.
The rights of the victim and the witness
According to the Atrocity Act, it is up to the state government to provide protection to the victim in accordance with Article 1 of this Act.  As well as the costs of investigation, inquiries, and court proceedings, litigation and transportation costs are obtainable.  It is also the responsibility of the government to rehabilitate the victim's family and provide appropriate compensation.
Special court system
As per Article 14 of the Scheduled Castes and Scheduled Tribes (Prevention of Atrocities) Act, a special court has been arranged for trial of the cases filed in the Atrocity Act.  Which operates in every state.  If a case is registered against a person under this act, the police must immediately arrest the person.  The persons involved in this case do not receive any advance bail.  Only after the arrest can the High Court grant bail.  In addition, the police has to file chargesheet within 60 days of arrest of the person.  After the chargesheet has been filed, the entire matter is heard in the special court.
It is important to protect the rights of the accused under Article 21 of the Constitution of India.
➡ Important Link '-
GUJARATI MAHITI CLICK HERE
HappyToHelpTech

What is the SC-ST Atrocity Act Law? Why not get bail in Atrocity? Learn atrocity law information.
4/ 5
Oleh HappyToHelpTech
Prev Next Home