You read my article regularly. Thanks for all. Here you are informed about Junagadh Parikrama. In addition to this, the press release list has also been given a link to download circulation after the recent rains. Which you can also download in this post.
The circulation around the girnar with the center of the girnar is the lily circle. It is believed that the virtue of the 33 million deities living in Girnar for the fort is found by virtue of the Girnar orbit. 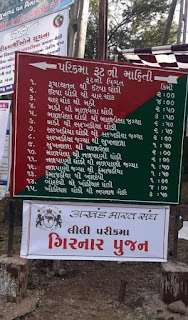 Thus, in Junagadh, twice a year, human mehiraman is seen in greater proportions, one in Mahashivratri fair and the other in Girnar's green circle. In almost all the cities and villages of Gujarat, human maharamanas emerge like ants. The atmosphere of Diwali and post-Diwali is somewhat different in Junagadh.

Apart from Gujarat, people from various states like Gujarat, Rajasthan, Madhya Pradesh, Maharashtra etc. come to know about the culture of Girnar and the penance of the monks. Nearly 8 lakh devotees join Girnar's green circle every year.
The Lily Parikrama begins with the temple of Dudheshwar Mahadev in the Bhavanath foothills. The total route is 36 kilometers long. Which passes through the dense forests of Girnar. Among them are teak, bamboo forests, flowing streams. Which makes one realize the beauty of nature. This 36-km-long circulation has many temples such as Zenabawani, Madhi, Manvela, Surajkund, Sarkhadiya Hanuman, Bordevi and finally Bhavnath.
Press Release on Junagadh Girnar Circle