New Delhi: The big news for Reliance Jio's customers has come. Jio will collect interconnect usage charges (IUC) from its customers. From next October 9, Jio will be charged 6 paise per minute for calls to other operators, according to a press release. According to the company, the company has paid Rs 13,500 crore to other operators in the last three years for this free service. "All recharges made by customers today will be charged 6 paise per minute for calls made to other mobile operators," Jio said in a press release. The charge is Interconnect Use Charges (IUC).

down to Zero.
1) Affidavit dated 29th October 2011 of TRAI in the Hon’ble Supreme Court:
Quote:
“8.12 …. TRAI is of the opinion that there should be progressive reduction in
termination charges finally converging to zero termination charge … at the end
of 2 years from the present.”
(In 2011, TRAI stated its opinion that termination charge should be made zero by 2014.
It should be noted that at that time, neither 4G nor Jio existed.)
2) After a comprehensive review of the IUC regime through a transparent and elaborate
consultation process in 2016, TRAI issued the Telecommunication Interconnection
Usage Charges (Thirteenth Amendment) Regulations, 2017 (placed before the
Parliament of India) as follows:

The decision was made under the provisions of the Zero Termination Charge of the Telecom Regulatory Authority (TRAI) whose deadline is January 2020 ' Jio said in a press release that the company will continue to charge customers for an offnet outgoing call until the IUC charge is abolished by TRAI. The company has also recently released new plans for its customers. Currently the company has to pay 6 paise per second for calls made to other networks. TRI had given a deadline to abolish the charge by January 1, 2020, but as of now TRAI is observing this deadline, it has been announced by Geo.
th October 2019]: Interconnect Usage Charge or IUC is a cost paid by one mobile
telecom operator to another, when its customers make outgoing mobile calls to the other
operator’s customers. These calls between two different networks are known as mobile off-
net calls. IUC charges are fixed by Telecom Regulatory Authority of India (TRAI) and are
currently at 6 paise per minute. 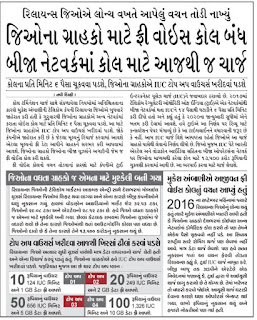 TRAI, has repeatedly since 2011, affirmed its stance that the IUC charges should be brought.