The period for helmets and PUCs has increased due to Diwali and elections by the government in Gujarat.  Rickshaw drivers will also be fined.  900 PUC Centers will also be opened for PUCs.  Pyramid fines have been reduced from 10,000 to 2500.
The Central Government amended the traffic rules by amending the Motor Wheel Act.  And breaking the rules of traffic imposed heavy penalties.  After this, protests over traffic fines have started in Gujarat.  Then the Gujarat government is changing the rules in the wake of this protest.  The government has reduced the penalty amount by modifying 50 clauses.  The state government has given relief against the strict rules of the central government.  However, the amount of penalties exceeds the current penalty
Diwali gift to people, helmet and PUC law not implemented till October 31
Chief Minister Vijay Rupani at a press conference today informed about the new rules of Motor Vehicle Act.  The State Government has modified the penal provisions of the Motor Vehicle Act.  The State Government has reduced the amount as per the penalty provisions of the Motor Vehicle Act. 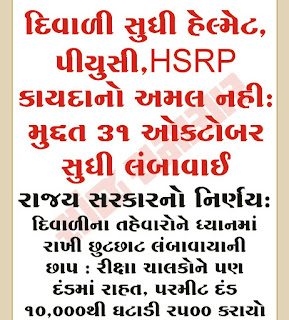 7. Rs 2000 fine for bikes on driving without a driving license, rickshaw and other heavy vehicles in the car Rs 3000 fine