Home / latest News / Soon will be a new note of 20 rupees, this will be the specialty

Soon will be a new note of 20 rupees, this will be the specialty

Join Telegram Group
Soon will be a new note of 20 rupees, this will be the specialty. 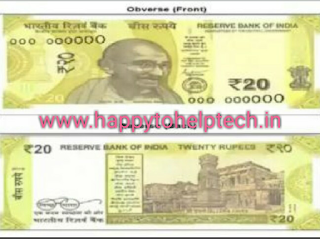 The RBI has issued a notarial notice on a new note of Rs 20.
www.happytohelptech.in
Reserv bank of india announs 20 rs new currency for indian pupil are very happy to this time.
You can get a new note of 20 rupees soon.  RBI has issued a notification on Friday.  In which it has been talking about bringing a new note of 20 rupees.  This notice has been informed by the RBI about the appearance and color of this note. This note will be signed by Governor Shankhikant Das and the caves of Alora depicting the country's cultural heritage behind the noteworthy portrayal.  The notes of Mahatma Gandhi's new series of green and yellow colors will be seen separately. Also, the RBI has said that even after the new note is issued, old notes remain in the currency.
www.happytohelptech.in
The next part - the next note of the 20-rupee note issued by RBI will be among Mahatma Gandhi's portrayals.  The value of today's side note will be written in Hindi and English numerals.  And RBI, India, India and 20 micro letters.  India and RBI will be written on the security bar.

The Reserve Bank of India (RBI) has announced that it will shortly issue Rs 20 denomination banknotes, in the Mahatma Gandhi (New) series, bearing the signature of the central bank's governor Shaktikanta Das. "The Rs 20 note will be greenish-yellow in colour. The new banknote has a motif of Ellora Caves on the reverse, depicting the country's cultural heritage," a statement by the RBI said. All the banknotes in the denomination of Rs 20 issued by the RBI in the earlier series will continue to be legal tender, it clarified. The note has other designs, geometric patterns aligning with the overall colour scheme, both at the obverse and reverse. The dimension of the new Rs 20 note will be 63 mm x 129 mm, the statement said.The obverse (front) side of the note contains a see-through register with denominational numeral 100, a latent image with the numeral and also a Devanagari version of the same. It also contains a portrait of Mahatma Gandhi at the centre, with micro letters ‘RBI', ‘Bharat', ‘India' and ‘20', along with with a guarantee clause, Governor's signature with Promise Clause and RBI emblem towards the right of Gandhi's portrait. On the right side of the portrait are -- an Ashoka Pillar emblem and electrotype (20) watermarks.RBI Introduces ₹ 20 banknote in Mahatma Gandhi (New) SeriesThe Reserve Bank of India will shortly issue ₹ 20 denomination banknotes in the Mahatma Gandhi(New) Series, bearing signature of Shri Shaktikanta Das, Governor, Reserve Bank of India. Thenew denomination has motif of Ellora Caves on the reverse, depicting the country's culturalheritage. The base colour of the note is Greenish Yellow. The note has other designs, geometricpatterns aligning with the overall colour scheme, both at the obverse and reverse.All the banknotes in the denomination of ₹ 20 issued by the Reserve Bank in the earlier series willcontinue to be legal tender.
In the next part, the guarantee clause, the handwriting of the governor, the symbol of the RBI will be left to the image of Mahatma Gandhi.  On the left side there will be Ashok pillar in the note.  The number of notes will be printed in a rising shape from right to left.
www.happytohelptech.in
HappyToHelpTech

Soon will be a new note of 20 rupees, this will be the specialty
4/ 5
Oleh HappyToHelpTech
Prev Next Home