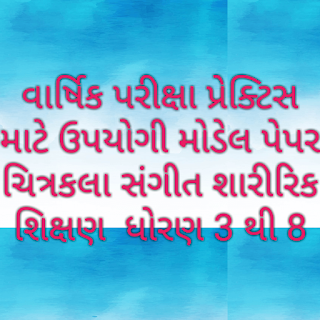 After the heat, the Primary Teachers Association had asked the government to make changes in the second session of state-level primary schools in standard 3 to 8 examinations.
Primary school new Time Table Varshik pariksha 3-4-2019 latest paripatra
www.happytohelptech.in Following this, the timetable of the Examination has been made by the Directorate of Primary Education by circulating the rules of all the DPOs and corporation schools. Examinations to be completed on April 3 will now be completed on 3 May and every afternoon
Std 1 to 8 Hetuo useful to all school
Examinations were conducted from 8th April to 29th April, according to the preliminary time table announced on 16th March, by taking the examination of secondary schools of the government schools of class 3 to 8 under the district panchayat of the state government and the second year of the students of standard 3 to 8 under the district panchayat. In the standard 3 to 5 students, two hours of 40 marks Examinations were held from 7am to 15th and 9th, 15th and students of Std VIII from 8th to 8th She was a three-hour exam in the morning from 9: 30 to 12: 30. According to the time table, from 8 April to 15 April, there was a www.happytohelptech.in continuous examination and after the election, few days leave was vacant. After selection, from 26 April to 29 April, students from class 3 to 8 examined subjects including picture, PT and music. This time table was introduced by the Gujarat Primary Teachers Association to the government that due to the heat, the time table should be changed. The government has also approved the Election Commission to amend the time table, and the approval of the Election Commission has been approved by the Directorate of Primary Education in the time table. The update has been announced and the new time table has been announced.
STD 8 PRIMARY SCHOOL VARSHIK PARIKSHA CHITRA ANE SANGIT MAHITI PUSTIKA DOWNLOAD
According to which the exams will be run from 8th April to 20th of April and there will be holidays between 8th and 8th of the elections, then the exams will start again from April 29th and will run till 3th May. According to this new time table, now the students of standard 5 to 8 will be taken between 8th and 10th, Examinations 6 to 8 will be taken from 8 to 11 in the morning. From 8th April to 15th April, students of standard 5 to 8 students will be able to complete the examination of important subjects including Mathematics, Gujarati, Environment, English, Hindi and Vignan. From 16 April to 20 April, physical education, pictures and music subjects will be taken in standard 3 to 8 according to the number of students. From 29 April to 3 May, standard 3 to 4 in Mathematics, Gujarati, Environment and English and Hindi subjects will be examined in the morning from 8 to 10. It is important that according to the previous program,
SUMMER VACATION DATE declare bay Niyamak LATEST PARIPATRA
the examination was held at 12:30 pm and there was not really much heat till 1pm even though the government has made such a major change in the examination program and the examination has been extended till May 3. With whom the corporation schools and many government officials School teachers are spreading anger because the summer vacation is scheduled to start from 6th May and May 3
ENGLISH  standard 6 to 8 Model paper of second semester 2019  is prepared by GCRT
PRI.SCHOOL VARSHIK PARIKSHA MODEL PAPER CHITRAKAM,SHAA SHI ANE SANGIT 2019.
All STD USEFUL PAPER
CHITRAKAM MODEL PAPER
www.happytohelptech.in all paper download here click this paper
SHAA.SHI. PAPER    SANGIT PAPER
HappyToHelpTech