GUJCET will give 1.34 lakh students in three sessions: Examination

Join Telegram Group
GUJCET will give 1.34 lakh students in three sessions: Examination
According to the Gujarat Education Board, the time has been announced for Gajcet and Gwalvas students for the engineering-pharmacy entrance after standard 12th science.
HSC SSC 2019 ALL UPDATE 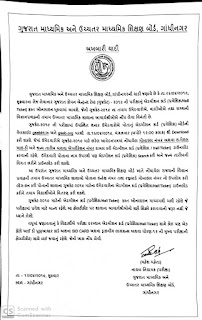 According to this, more than 1.34 lakh students will be offered this year and the examination will be held in three sessions on 26th of this month. The number of students in Gujarati Have fallen The Gujarat Common Entrance Test will be conducted across the state on April 26th. This will be the first of the three examinations conducted in three sessions.
Ahmedabad - This year, the students who have passed the GUJCET exams are facing uncertainty about the exam date. On the date of the General Elections declared on Sunday, students of GUJCET will have to remember the new date once again. Education_board_2 After 12th standard, the Gujqat-Gujarat Common Entrance Test dates for admission to engineering-pharmacy have also changed this year. It was decided to take this exam on March 30 first. But after CBSE examinations of one of the 12th standard on March 30, the board changed the date of Gujarati letter to 4th April after the introduction of students and guardians. Subsequently, on 4th April, after a change in the CBSE Examination Program, the Gujarat Education Board again changed the date of Gujcet on 23 April.
HSC SSC 2019 ALL UPDATE
GUJCET will give 1.34 lakh students in three sessions: Examination
During the session, examinations of Physics-Chemistry are held in 10 to 12, followed by Biology during 1st session and 3 to 4 Maths in the third session in the second session. The Hall Ticket has not yet been announced by the Board. Half tickets will be placed on the website within a few days.
The student must take admission in the examination room as per the time indicated in the Hall Ticket. This year, in the GUJCET, the number of students enrolled in the GUJCET is 56913, the B-grade 77478 and the total of 1,34,846 students, including 455 students in AB group, will be held. This year, the number of students decreased from 1.36 lakh students to GUJCET this year.
GUJCET will give 1.34 lakh students in three sessions: Examination
HSC SSC 2019 ALL UPDATE